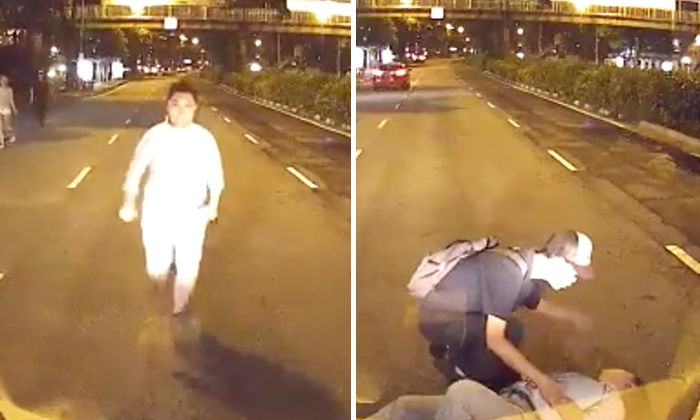 Stomp understands that the 'man' who threw himself on the vehicle was actually a woman.

She had been in emotional distress and was drunk.

Following the incident, the driver called the police but both the man and woman in the video left before officers arrived.

In response to a Stomp query, a police spokesman said: "On Nov 5, 2017 at 5.56pm, the police received a call for assistance along Beach Road.

"The police are investigating a case of rash act."

A video of a man feigning injuries after running into an oncoming vehicle has left netizens in stitches.

The video, posted by a Facebook user, Jacky Ang, showed a vehicle as it was traversing down the middle lane of road on Sunday (Nov 5) at around 5.48am, as indicated by the timestamp.

The driver of the vehicle then slows down and stops his vehicle as he notices a man running towards him, along with an accomplice on the leftmost lane.

The man throws himself onto the windscreen of the vehicle and falls off, holding his stomach as he lay on the road as if he was in excruciating pain.

Meanwhile, his accomplice runs up to him and chastises him.

Another netizen commented that this was not the first time such a thing had happened, while some took the chance to highlight the importance of having a dashboard camera in their vehicles.

Related Stories
China's fake accident scam in S'pore? Watch how old man hurls himself onto stationary car in Ang Mo Kio
Of all car accident scams in China, this 'victim' has the worst acting skills ever
Man's 'Oscar-worthy' performance in Farmway 'accident' wins him -- a police arrest
More About:
funny
accident