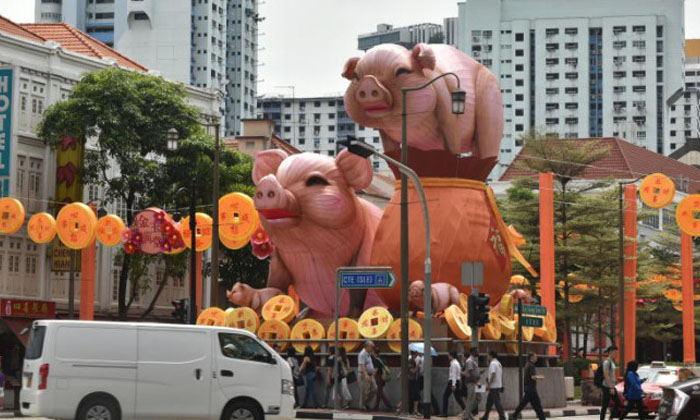 The 9.5m pig lantern in Chinatown has not even been lit up yet, but it has been the talk of the town, with many members of the public giving mostly negative input on the way it looks.

Philemon Loh, the head of Marketing Publicity of Chinatown Chinese New Year Celebrations 2019 Organising Committee, said in response to a Stomp query that he would like to thank the public for their feedback and concerns, as well as explained the design of the pigs.

He said that the theme for this year's Chinatown Chinese New Year Celebrations 2019 is Celebration of Abundance and Prosperity.

The light-up design features pigs with joyous expressions while holding various props such as gold coins, ingots and well-wishes for the Lunar New Year.

The lantern, standing near the junction of Eu Tong Sen Street, New Bridge Road and Upper Cross Street, will be lit on Jan 20 till March 6 to usher in the Year of the Pig, which begins on Feb 5.

The lantern was designed by a team from Singapore University of Technology and Design (SUTD) from July 2018 to October 2018.

After designing the lantern, the team worked closely with craftsmen from China's Zigong city in the Sichuan province to bring their design to life.

The team ensured that the craftsmen paid attention to small details in the design in terms of size, colour and even to the expressions portrayed by the pigs.

This year is the eighth year that a student team from SUTD has partnered with Chinatown Festivals.

Mr Loh said: "We deeply appreciate the efforts and time that the students have put into creating a unique and spectacular design for the festival every year."

"This year, our design was also created to portray real pigs, hence the pigs are not entirely baby pink in colour.

"The brown shading was necessary for the pigs to look realistic and also for contouring effects; an entire pig in baby pink will lack dimension and look pale, if not close to white when lighted up.

"In response to questions asking if we would consider partnering with Disney and the likes of it, the committee prides ourselves in keeping to Chinese traditions and not conforming to commercialisation."

However, many members of the public have given negative feedback on the design of the lanterns. Some even provided suggestions on how to improve the design.

She said: "This year, the pig is poorly represented. It looks like a fat sloppy animal awaiting its fate to be part of a Lunar New Year barbecue.

"The animal could have been represented by smaller cute piglets or by a piggy bank which would depict prosperity and the wish for more babies.

"The pig should have been designed to bring out its positive aspects.

She also suggested running a contest at the end of each lunar new year to choose how the animal icon should be designed.

When Chinatown Festivals posted pictures of the pig on its Facebook page, netizens similarly took to the comments section to flame its design.

Facebook user Hong HengEn, who is& born in the Year of the Pig, was disappointed that the pigs were not cuter.

One Twitter user even referred to the previous year's rooster, which he found "hideous" too.

The decorations at Chinatown has always been rather hideous when it comes to the main "attraction". 2017's rooster looked like a tea pot with a rooster's head for a spout. But the pigs really look worse than the previous years. 真的是一年比一年差...

Mr and Mrs Wu, retirees who were visiting Chinatown, told Shin Min Daily News that they were disappointed by the decoration and said the brown colour made the pigs look "dirty".

In its statement to Stomp on Tuesday (Jan 15), Mr Loh added: "To conclude, the committee appreciates all feedback and take each and every comment seriously.

"We would like to thank our supporters and will continue to strive and deliver a wonderful festival to all visitors."

Related Stories
Ever seen a 28-metre yu sheng? Thank you, Royal Plaza on Scotts for letting me be part of it
'Lucky' stall at Chinatown bazaar goes for $13,899 – highest bid in six years
Clementi resident asked to scale down Christmas decorations and shift them to safer place
More About:
decorations
Chinese New Year