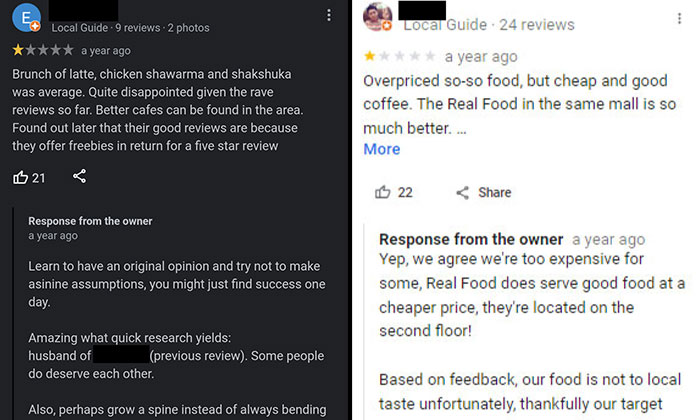 We are all familiar with the old adage, "the customer is always right" but not all service providers agree with this.

A cafe in Orchard Central has come under fire for leaving scathing responses to one-star reviews left by disgruntled customers on Google.

Stompers alerted Stomp to a thread on Reddit calling out Grain Alley for insulting and shaming customers who left one-star reviews and allegedly rewarding those who leave five-star reviews with free gifts.

The Redditor acknowledged that eateries offering incentives for good reviews is normal however, he took issue with how the cafe handles bad reviews.

"Whenever a negative review is received, the reviewer is pelted with insults, name-calling, name-and-shame tactics and even doxxing in the case of one customer where the business owner thinks that it is in good nature to write a scathing complaint to her employer," he wrote.

"Another customer has their marriage called out just because of a one-star review. Wow!"

In the review section, the cafe admonishes one customer for not having 'original opinions' and says he's just echoing his own wife.

It also told him to "grow a spine".

The cafe told another reviewer who complained about not being allowed to use a tablet at the eatery not to come back, calling them "petulant" and "insolent".

Read more reviews and responses by the cafe in the gallery above.