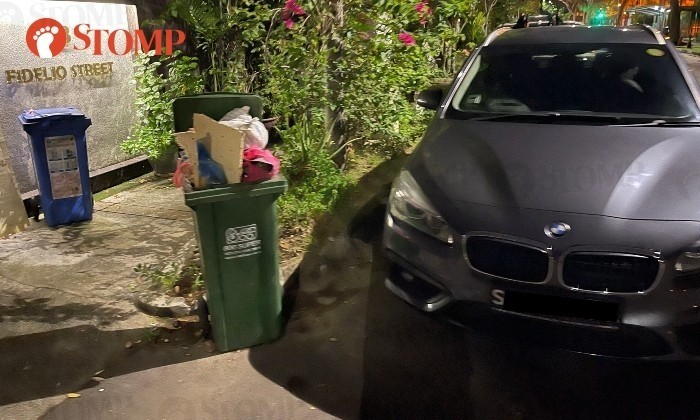 More unhappiness over parking in a private estate.

A resident of Fidelio Street in Opera Estate has nowhere to park after a neighbour's BMW took the spot in front of his home on Wednesday night (Nov 9).

Stomper Calvin said it was not the first time.

He said: "The pesky neighbour has been an unfriendly neighbour since the start of time, always parking in front of the house even after being told to kindly park at their own house.

"Instead of parking inside their house, they felt the need to park in front of my house, leaving me with no place to park for the night."

Calvin told Stomp that he could not park within his own property because "my porch has some stuff".

He added: "Their porch is empty and they still parked outside."

What happened to the Stomper is a big reason that many private estate residents resort to using rubbish bins to "chope" parking spots in front of their homes, a practice that has been frowned upon by other Stompers.

On Nov 1, Stomper Gabriel called the residents of Huddington Avenue in Serangoon Gardens "selfish" for using the bins to prevent others from parking.

In response to a Stomp query on a similar incident, the Land Transport Authority (LTA) said:

"For such issues within the private estates, the LTA adopts a community approach towards resolving them by advising residents to ensure that their objects do not pose a safety hazard or an obstruction to other users.