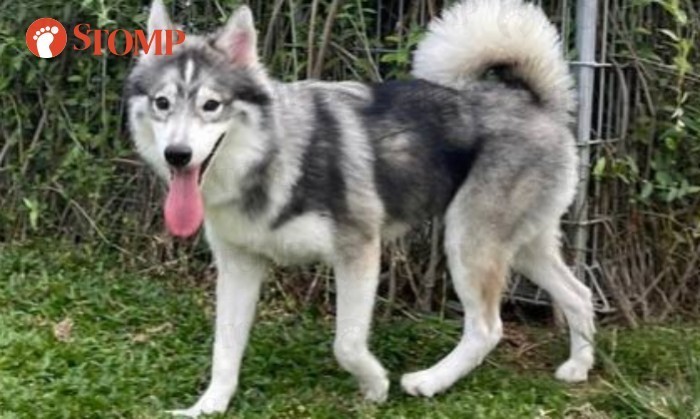 Missing puppy found in bushes on TPE after 5 days, thanks to dash cam footage and Telegram

Lumio, a seven-month-old pomsky, has been missing since Oct 1, last seen at 9pm at Northshore Link.

A pomsky is a cross between a Pomeranian and a Siberian Husky.

Stomper Jesselene said that she is appealing on behalf of the owners for help to find the pup.

"A whole community in Singapore has since formed a search party on Telegram to look for the dog, day and night, from Sengkang to Punggol and Coney Island as well," said the Stomper.

"The necessary groups such as SOSD (an organisation for stray dogs), NParks, SPCA and many more, including vets, have been notified and flyers of the missing dog are being handed out daily by volunteers in hopes of having people come forward with news or sightings of the missing puppy.

"Even a telepathic animal communicator has been engaged."

She continued: "People are going from place to place with a recording of the owner's voice and squeaky toys – and food as we are not too sure if the timid puppy has eaten yet – hoping to lure him out."

The Stomper added that a reward is being set up for Lumio's safe return. 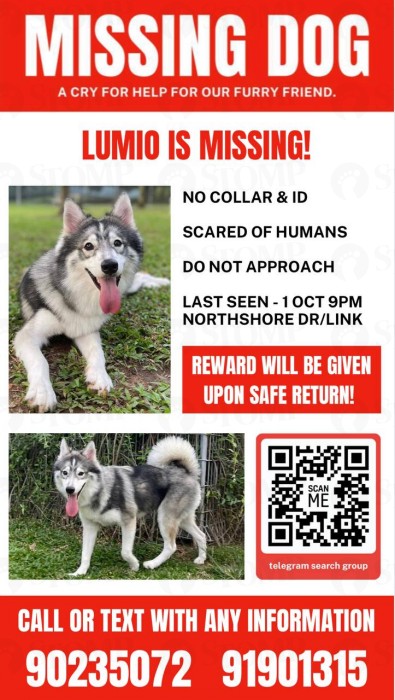 If you have seen Lumio or have any information about him, kindly contact Stomp at stomp@sph.com.sg or WhatsApp 9384 3761.

Related Stories
Family offering reward for missing pet lovebird: 'We have been unable to sleep well'
Found: $7,800 reward offered for toy poodle that went missing in Hougang
Missing dog finally reunites with fosterer after 5 days on the run
More About:
looking for
dog
missing
animal