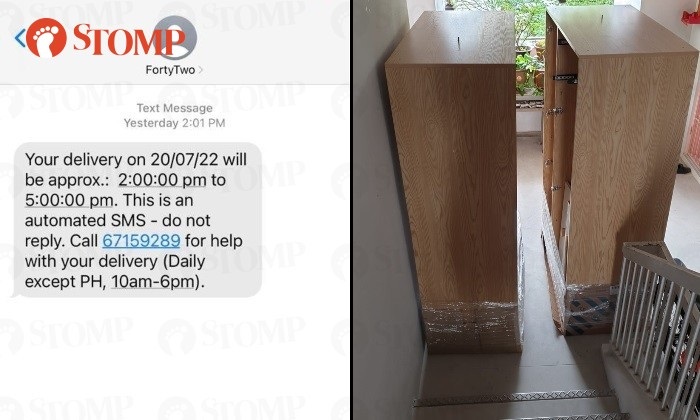 Online furniture shop FortyTwo had messaged Stomper Kenneth that the two wardrobes he ordered would be delivered in the afternoon between 2pm and 5pm on July 20.

But he said the furniture arrived in the morning at 9am without any notification.

He told Stomp: "Worse, they just placed the bulky items outside, blocking the staircase and the neighbour’s home unless you don’t mind customer or town council complaints."

He shared photos of the two unassembled wardrobes crowding the common area. 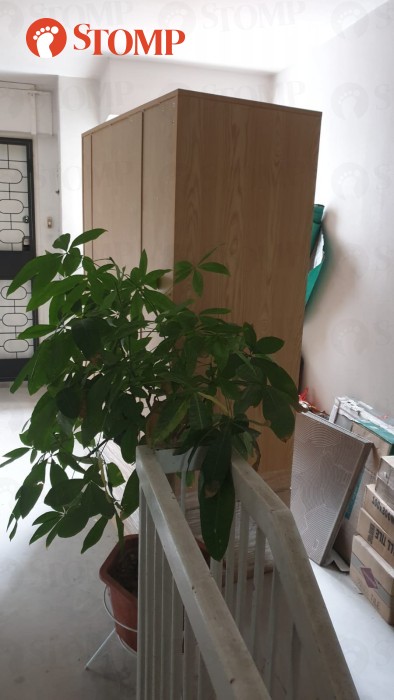 Kenneth said: "The customer service can tell you they couldn’t do anything, admitting it was their fault for delivering the items outside the time frame.

"Knowing it was their mistake, they would not come back for the assembly you have paid for.

"Until I had to tell them that I had to cancel the order. Then they immediately came and cleared the items.

"And worse, you get a scolding from the delivery men."

In the screenshots of the messages from FortyTwo that Kenneth shared with Stomp, the company apologised, saying: "This situation is not ordinary and these incidents are not typical of us."

FortyTwo explained what happened: "The delivery team sending both of the wardrobes (unassembled sets) to you earlier than the given timing (2pm-5pm) was actually our third-party delivery logistics team. They didn’t inform us about the whole situation until you had contacted us.

"We tried to contact them to pick up the items and re-deliver them on the given timing, but they said they could only be back in the afternoon because they were already out of the location."

FortyTwo added that it has permanently stopped its partnership with the third-party logistics company effective immediately.

The furniture seller also offered the Stomper a 25 per cent discount code for his next purchase with no minimum spending required.

FortyTwo said that it has proceeded with the cancellation and refund of Kenneth’s entire $1,977 order.

The Stomper called it the “worst customer and delivery services ever encountered in my entire purchase experience with FortyTwo”.

Recently, Stomp reported another customer having issues with an online furniture shop, Miyamiko, which took more than 11 weeks to repair a crack in a bed frame the customer bought.

Related Stories
Customer takes 11 weeks to get online shop to fix crack in bed frame, loses patience over 'paint' job
Customer taunted by seller who sent wrong durian and told her to 'compromise'
Stomper loses $90 worth of bedsheets after only getting one of two Shopee parcels
More About:
customer service
furniture
online shopping
delivery