One-legged 'tourist' begs for money to go home, gets $10 in 5 minutes at Yishun 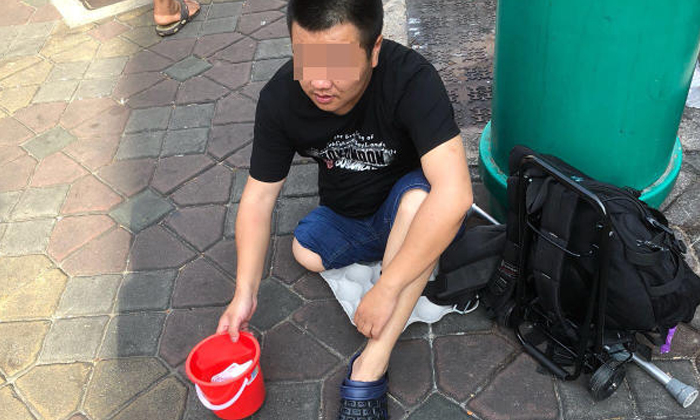 A handicapped man who identified himself as a tourist in Singapore said that he had used up all his money and was resorting to begging so that he could return home.

According to Lianhe Wanbao, a witness spotted the one-legged beggar in Yishun's Chong Pang City on Saturday morning (May 12), at around 9.15am.

Ms Xie told Wanbao reporters that she was having breakfast there when she saw the man, who looked to be in his 20s, sitting beside a dustbin and begging from passers-by.

The man, who was missing his right leg, had a red bucket, crutches, and a black trolley bag with him, said Ms Xie.

Ms Xie added: "I suspected that he was a member of a foreign beggar syndicate, so I approached him and asked where he was from. I also asked if he had encountered any difficulties and needed help."

The man reportedly said that he was 28 years old and had arrived alone in Singapore from China two weeks ago. He also apparently told Ms Xie that he was staying at a hotel in Geylang.

According to Ms Xie, the man initially planned to return to China on the 12th,but had spent all his money. Therefore, he decided to take the MRT train from Geylang to Yishun, and was begging in Chong Pang.

"The man said he was planning to stay in Chong Pang till the afternoon and would return to China on the same night," remarked Ms Xie.

"It left me feeling puzzled because how was he sure that he would beg for enough money to return home?"

She said the man claimed to have lost his leg in an accident and that this was his first time in Singapore. However, he apparently could not answer her when asked why he was here alone.

Ms Xie added that she noticed how five aunties placed $2 notes in the man's bucket in the mere span of five minutes.

One of the elderly donors said: "I know that this might be a scam, but I felt pity for [the beggar] after seeing how he had lost his right leg, so I donated $2 to him."

Vendors also added that this was the first time they saw the man begging in the area.