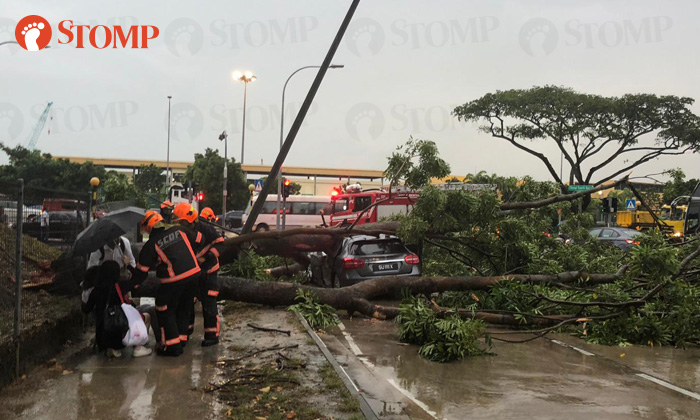 One person was sent to Changi General Hospital (CGH) with injuries after a tree fell on a Mercedes along the junction of Changi South Avenue 1 and Xi Lin Avenue yesterday (Oct 12) at about 6.20pm.

Stompers Alim and Lin shared photos and videos of the incident with us.

"It has been raining heavily during the past few days," said Alim.

"Old trees along roadsides are dangerous to drivers."

In the photo he shared with us, a car is seen with its roof flattened while its windscreen is completely shattered.

Debris from the fallen tree was strewn on the road around the damaged car.

Lin also shared a few videos with Stomp and added that the incident had caused a traffic jam.

"As it was raining heavily and people were coming home from work, there was a traffic jam," she said.

"I was caught in the jam for about 30 minutes.

"After a while, the rain started to lighten."

In another video, workers were seen sawing away the dead tree which had fallen onto the road.

Singapore Civil Defence Force (SCDF) personnel were also seen diverting traffic away from where the tree had fallen.

The fallen tree had covered three lanes on the left side of the road.

In response to a Stomp media query, SCDF said: "SCDF was alerted to an incident along the junction of Changi South Avenue 1 and Xi Lin Avenue at 6.26 pm.

"One person was conveyed to Changi General Hospital."