Oil spillage at PIE exit turns out to be accident involving 3 motorcycles, 1 rider taken to hospital 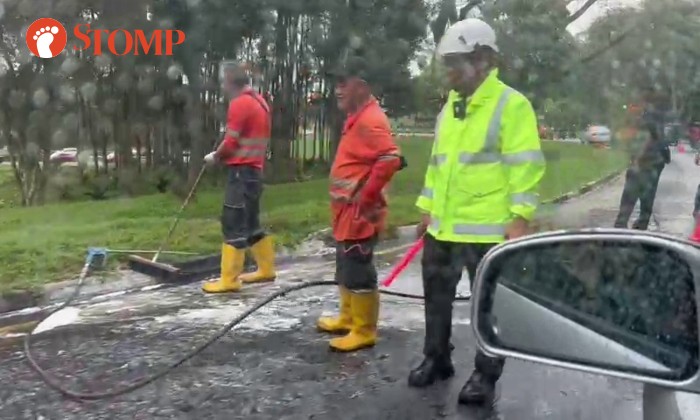 The Stomper thought it was an oil spillage.

Three motorcycles were involved in an accident while exiting the Pan-Island Expressway (PIE) and a 28-year-old male rider was taken conscious to the hospital on Sunday morning (Nov 27).

In response to a Stomp query, police said they were alerted to the accident along the PIE towards Changi Airport at the Stevens Road exit at 7.40am.

The motorcycles were believed to have self-skidded and police investigations are ongoing.

The Land Transport Authority tweeted about the accident at 7.48am.

Accident on PIE (towards Changi Airport) at Stevens Rd Exit

Stomper Angela shared videos of the road taken from a car at 11am.

The videos show that one of the two lanes was closed, causing a traffic jam. Police were at the scene and workers appeared to be washing the road.

Angela told Stomp that an electronic signboard on the expressway had informed motorists that there was an oil spillage.

She was unaware at the time that an accident had happened.