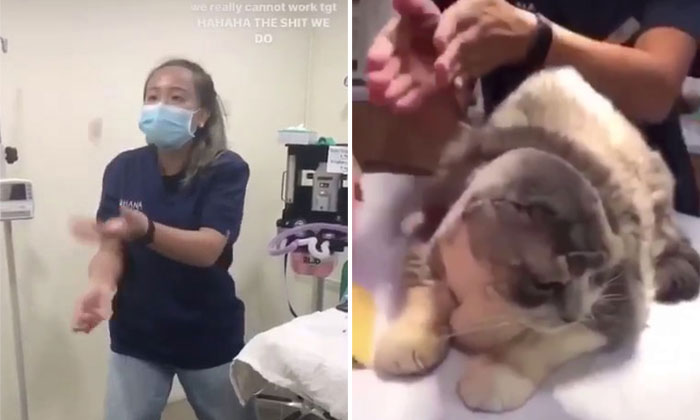 The Animal and Veterinary Service (AVS), a cluster of the National Parks Board (NParks), told Stomp in a statement that it is looking into an incident where two nurses posted videos of themselves behaving inappropriately in a veterinary clinic at Pasir Ris.

Stomp earlier reported on the Instagram videos that showed the nurses from Ohana VetCare clinic bouncing and juggling a dog's testicles as well as one of them clapping her hands over a cat that had both of its ears surgically removed.

Netizens have called the nurses out for their "lack of compassion and sympathy" towards animals and many have demanded the clinic sack them.

The clinic responded to the incident in a statement on Facebook saying that the nurses have been suspended as it investigates the incidents captured in their video further.

It added that it will be "conducting more staff training on good animal handling skills to ensure a fear-free environment for all our patients".

In response to a Stomp query, AVS Group Director Dr Chua Tze Hoong said that they are aware of the incident.

"The veterinary profession is expected to perform their duties to the highest standard and also ensure their staff do so," he said.

"The behaviour of the nurses as seen in the videos raises questions on their professionalism, and AVS is looking into this case."