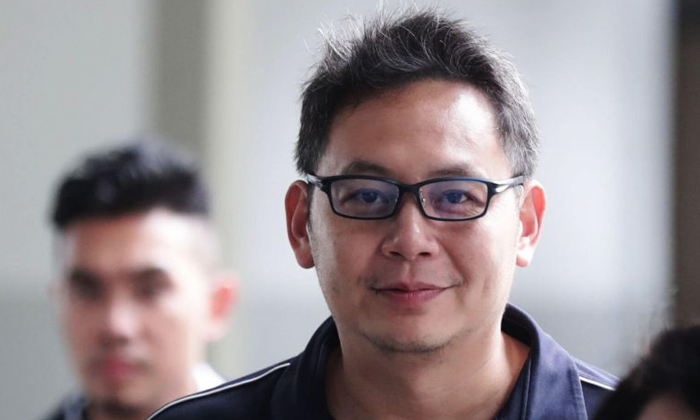 The grandson of the founder of OG department store was fined $3,500 on Monday (July 15) for harassing the husband of his alleged lover.

After a trial, Kelvin Liu Chin Chan was found guilty of one charge under the Protection from Harassment Act, brought by the woman's husband, civil servant Desmond Tay Kwang Ju.

Liu, 44, committed the offence between June 2016 and January 2017 while married to another woman.

During the trial on July 6 last year, Mr Tay, who turns 40 this year and is attached to the Singapore Consulate-General in Shanghai, said Liu had harassed him with text messages and photographs intended to belittle and cause distress to him.

In his testimony, Mr Tay said he learnt of the alleged affair when Liu's wife contacted him in May 2016.

She alleged that his wife, identified only as Madam Lim, was planning a trip to Hong Kong with Liu the following month.

Mr Tay revealed that after being told of the alleged affair, he hired a private investigator and found out his wife and Liu had travelled to Hong Kong from June 7 to 10 that year.

However, Madam Lim later denied she was cheating. To clarify the issue, she got her husband to create a chat group with all four parties included.

But in the group, which he named "Confessions of Marco Polo", Liu sent belittling and humiliating messages, calling Mr Tay an "idiot" and a "wayang king".

Liu also asserted that Mr Tay was lying about the nature of Madam Lim's alleged affair.

Mr Tay said Liu also sent him two photos - a topless picture of Mr Tay, taken by Madam Lim in private, and a photo of a topless torso with the face obscured, believed to be Liu.

Mr Tay said: "I think he wanted to let me know that he had something private of me and make me feel vulnerable. It felt like he was trying to say he's superior to me in physique, which is why my wife is with him and not me."

It was heard in court that Mr Tay's wife filed for divorce in August 2016. But he filed a defence and counterclaim on the basis of adultery.

During the trial, Liu claimed that the Mr Tay had made several threats to him through third parties. He also produced WhatsApp conversations in court in which Mr Tay had called him "a real joke" and said he was prepared to tell everyone about the case.

On Monday, Mr Tay's lawyer, Mr Luke Lee, urged Judge Ng to sentence Liu to either a week in jail or a fine of $5,000, stressing that the offence was committed over six months.

Defence lawyer Eugene Thuraisingam said his client was a first-time offender and pleaded for a fine of not more than $1,500.

The case has been adjourned to Aug 13 for a hearing on the issue of costs.

Liu belongs to one of Singapore's richest families. His grandfather was the late billionaire Tay Tee Peng and their family made the Forbes list of wealthy individuals.

For harassment, offenders can be jailed for up to a year and find up to $10,000.