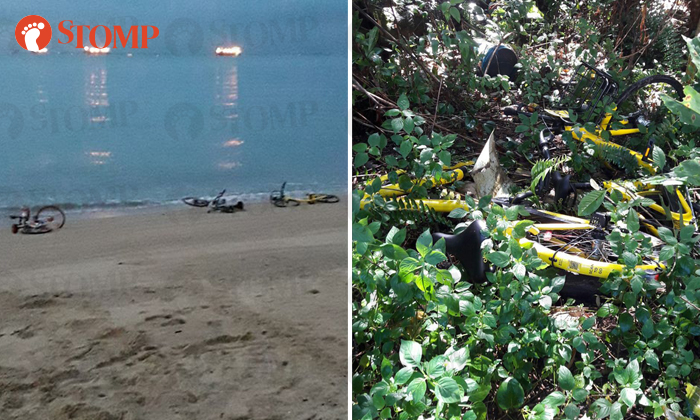 The first month of 2018 and already we have a few more cases of shared bicycle abuse.

While it seems that shared bicycles being found in canals and improperly parked on the side of the road have become the new norm, these ofo bicycles were found in more unexpected places.

The first instance was a photo of three bicycles, one of them belonging to bike sharing firm ofo, lying on the beach next to the sea.

While it is unclear where and when did this occur, the photo was sent to us on Jan 21.

On the same day, Stomper Shah stumbled upon two ofo bicycles in what she describes to be a "jungle" near a bus stop along Yishun Avenue 1.

Shah told Stomp that she was waiting for the bus when she had found the shared bicycles lying in the forest area nearby.

Shah said, "I just find that the company provides this convenient service out there yet people are selfish and vandalising it.

"I also wish that people would stop vandalising these bicycles."

She added that she hopes the authorities will take action against these errant users.