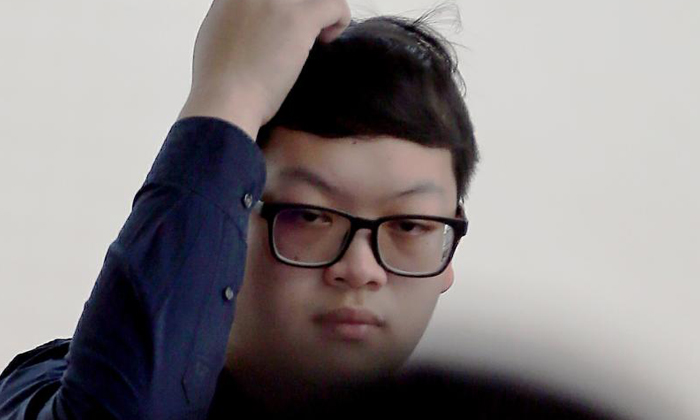 A Nanyang Polytechnic (NYP) student was looking for pornographic material on his mobile phone in a male toilet of his school when he decided to use the device to record a video of a schoolmate in an adjacent cubicle.

Brandon Mandolang Yong Fu, 18, who had earlier been listed as a student leader on the NYP website and was also a scholarship recipient, was caught after his victim spotted the mobile phone and alerted the police.

The Singaporean pleaded guilty in court on Tuesday (Nov 26) to engaging in insulting behaviour with the intent to cause alarm.

Mandolang went to the toilet at around 11am on May 2 and entered one of the cubicles.

Deputy Public Prosecutor Kenneth Chin said: "When the victim entered the cubicle next to the accused, the accused decided to record a video of the victim and held his mobile phone over the cubicle partition using the front-facing camera.

"The accused recorded the victim for one to two minutes."

The court heard that he retracted the mobile phone when the 18-year-old victim spotted it.

The victim then waited outside the toilet to confront Mandolang but left after 15 minutes as he was late for class.

Closed-circuit television footage, however, showed Mandolang entering the toilet and leaving after his victim left the premises.

The victim made a police report at around 9.15pm that day.

On Tuesday, Mandolang, who was unrepresented in court, told District Judge Seah Chi-Ling that he regretted his actions.

He added: "I've been suspended from my school for a semester and lost my scholarship."

Judge Seah has called for a report to assess his suitability for probation.

Mandolang is expected to be sentenced on Dec 24.

Offenders convicted of the offence can be jailed for up to six months and fined up to $5,000.

Contacted for comment, an NYP spokesperson confirmed that Mandolang was suspended earlier this year and his scholarship rescinded. He has also been removed from the executive committee position of his CCA.

"He is currently a Nanyang Polytechnic student. As the case is due for sentencing next month, we are unable to comment further," the spokesperson said. "In the meantime, we have offered counselling and support to the affected students."