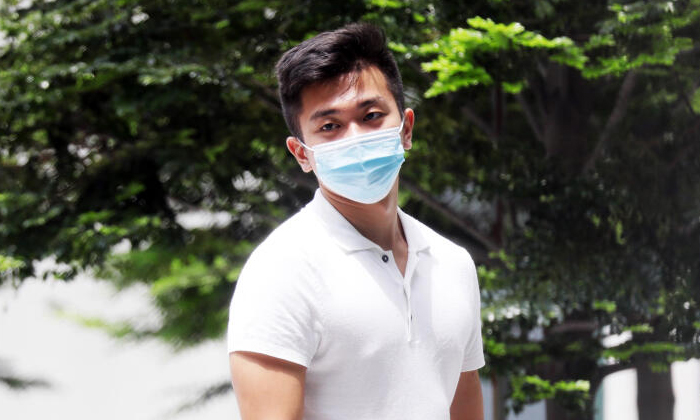 For a video for a friend's YouTube channel, a teenager donned a wrestling mask and pretended to wrestle his friend in the middle of a crowd gathered at Clarke Quay on New Year's Eve.

Glaxy Low Xuan Ming, 19, and Kotra Venkata Sai Rohankrishna, in a Spider-Man costume, succeeded in being the "focal points of attention in the crowd", and also earned themselves charges for flouting Covid-19 rules.

The court heard that some time before 11pm on Dec 31 last year, Low met Kotra and two other friends, Lee Hern Sing and Mr Putchakayala Akash, in Prinsep Street.

Kotra wanted to do video interviews with intoxicated members of the public for his channel, and the others agreed to help him.

Low was wearing a wrestling mask with a face mask beneath it when the group moved to Clarke Quay where large crowds had gathered.

He and Kotra looked for people to interview while Lee and Mr Akash handled the lighting and camera equipment.

From around 11.30pm on Dec 31 to around 12.15am on Jan 1, the four gathered with others at various places in Clarke Quay, including outside Clarke Quay Central, on and near the Read Bridge, and outside Riverside Point to shoot the video and pose for pictures.

Low failed to keep a distance of 1m from at least 20 other people.

He and Kotra play-acted wrestling for the video, said Deputy Public Prosecutor Wu Yu Jie, who added: "By virtue of their costumes, they were also focal points of attention in the crowd."

Low's lawyer, Mr Soon Wei Song, told the court that Low misunderstood the five per group rule at the time and thought he was allowed to mingle with different groups as long as he stayed in a group of five.

He added that his client did not set out to break Covid-19 rules but gathered primarily for "content creation".

However, DPP Wu countered that ignorance is not an excuse for breaking the law. "His actions were deliberate and he acted in this way over a significant period of time," he said.

Kotra and Lee's cases are still pending. Their ages, and Mr Akash's, were not mentioned in court documents.

Five other men have been fined $1,500 each for breaching Covid-19 regulations in relation to the New Year's eve gathering at Clarke Quay. Two students who faced more than one charge were fined $2,000 and $3,000 respectively on March 8.

Videos posted online show a rowdy crowd cheering, singing and celebrating, in what the authorities called a blatant flouting of Covid-19 safe management rules and a potential super-spreader event.