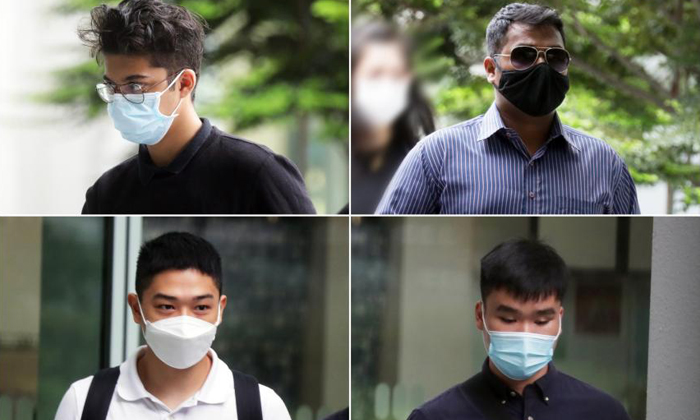 Four men were fined $1,500 each on Tuesday (April 5) for breaching Covid-19 regulations during a New Year's Eve gathering involving hundreds of people in Clarke Quay.

Shyama Kumar Sharath, 21, Ateesh Ashutosh Rao, 22, Kevan Loh Wei Kang, 22 and Declan Goh, 23, each pleaded guilty to one count of failing to keep a 1m distance from others in the crowd.

The court heard that Goh had met up with Loh and three other friends at a bar in Clarke Quay on Dec 31 last year.

They sat along the riverside and when it started to rain, moved towards Clarke Quay Central.

At around this time, a group of four including Kotra Venkata Sai Rohankrishna and Glaxy Low Xuan Ming were in the same area filming content for a YouTube channel.

Their ages were not mentioned in court documents.

Kotra was wearing a Spider-Man suit and Low, a wrestling mask. They were interviewing people, taking photographs and shooting videos.

At around 11.30pm, Kotra and Low wrestled in front of the camera.

Goh, who was not wearing a mask, acted as their referee and in the process came within 1m of the two of them.

Loh also posed for a photograph with Kotra's group without keeping a 1m distance or wearing a mask.

Separately, Rao and Sharath were part of a group of nine near Read Bridge outside Riverside Point celebrating the New Year, despite being not allowed to gather in groups larger than five.

At around midnight, one of their friends, Verma Pulkit, 22, climbed the parapet of the bridge and popped open a bottle of champagne.

During the festivities, Rao and Sharath did not keep a 1m distance from others in the crowd.

Deputy Public Prosecutor Wu Yu Jie told the court that the four men were deliberately non-compliant. "This was a blatant breach of the measures put in place to curb the transmission of Covid-19.

Kotra, Low and Verma have been charged in court and their cases are pending.

The New Year's Eve gathering is believed to have involved hundreds in a countdown party in front of Riverside Point.