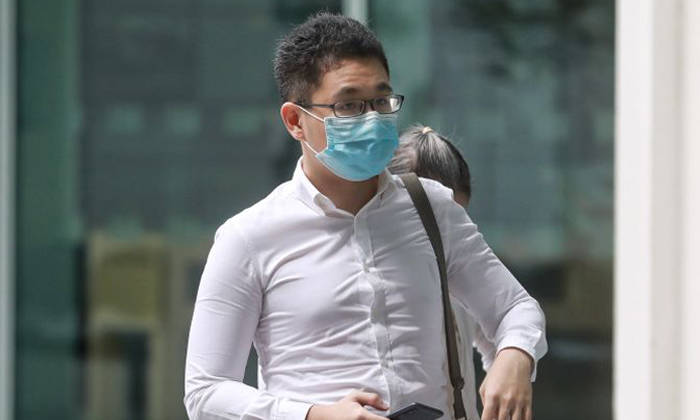 A National University of Singapore (NUS) student has been sentenced to 10 weeks' imprisonment for filming two women in the shower on campus.

Jonathan Angga Dharmawan Jie, 25, lowered his head as the sentence was read out to him by District Judge Sharmila Sripathy-Shanaz on Monday (July 19).

The third-year student majoring in engineering science had pleaded guilty in a district court on June 18 to two counts of insulting a woman's modesty.

NUS told The Straits Times on Monday that Jie is currently suspended.

The judge declined to call for probation reports, and noted the significant volume of voyeurism cases on campus. She stressed a need for "robust, deterrent sentencing".

Judge Sharmila noted that Jie committed the offences with the knowledge of a similar event that happened in Eusoff Hall at NUS in 2018.

He placed his mobile phone between the louvres at the bottom of the door and recorded two videos.

The woman was dressing when she noticed somebody looking up at her through the louvres. The DPP said the woman shouted at the intruder, who then left the toilet.

Jie deleted the videos as he felt guilty. But four hours later, he recorded two clips of a 22-year-old woman who had gone into the same bathroom.

This victim, who was rinsing her hair, screamed when she saw his mobile phone. Jie ran away but she later spotted him standing outside "looking concerned".

Campus security arrived at the scene soon after and an officer found an incriminating video on Jie's mobile phone.

Jie then admitted that he had committed the offence to "gain a sense of accomplishment" and he was "a bit tipsy" after downing some alcoholic drinks.

The court heard on Monday that Jie admitted he was addicted to pornography at the time and his parents and church leaders had since offered to supervise him.

However, Judge Sharmila said she was not satisfied that their supervision would help with Jie's addiction.

She cited a similar case in which Chief Justice Sundaresh Menon noted that pornographic consumption occurs in "the most private of circumstances", such that parental intervention and supervision would likely not be feasible.

Judge Sharmila addressed Jie directly and told him he was fortunate to have the support of his family and church leaders and urged him to reform.

"This mistake should not define you for the rest of your life," she said. Jie responded by thanking her.

He began serving his sentence on Monday.