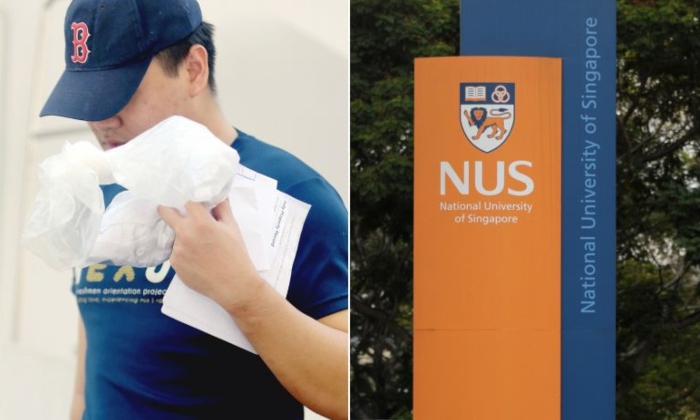 A National University of Singapore (NUS) undergraduate has admitted to taking voyeuristic videos, including those of women showering on campus in 2019.

Joel Rasis Ismail, 27,  pleaded guilty on Friday (Sept 11) to three charges of insulting a woman's modesty and one of criminal trespass.

Seven other similar charges will be taken into consideration during sentencing on Sept 28 by District Judge Adam Nakhoda.

His victims cannot be identified due to a gag order to protect their identities.

Joel had previously stated in an online resume that he is a "budding architect" and was the top student in his secondary school.

Court documents state that the NUS undergraduate was staying at a residence hall when he committed the offences.

On two occasions in March last year, Joel went to the third level of the NUS Kuok Foundation House - which is part of student dormitory Raffles Hall - to visit a friend. He went there despite knowing that it was zoned a females-only floor and men are barred from entry, said Deputy Public Prosecutor Andre Ong.

Both times, he went to a toilet on the same level to relieve himself, when he heard a woman enter an adjacent cubicle.

On one occasion, he placed his mobile phone in the gap between the cubicle partition and toilet floor, and recorded the woman bathing, court documents stated.

"The accused retained the video for a few days and re-watched it for his pleasure and to boost his libido," said DPP Ong.

Two months later, Joel struck again. He went to the women's toilet on the sixth level - also zoned as a females-only floor - of the same building to film a schoolmate showering.

The court heard that when he found the video recording to be "unsuccessful", he then took another video of the woman but was caught by her.

He fled to the third level to collect his laundry and change his clothes before running back to his residence.

The police arrested Joel a few hours later after reviewing closed-circuit television camera footage which captured his movements. He later admitted to his offences.

DPP Ong said that Joel had committed the offences while knowing of the public disquiet caused by a similar incident which occurred in another residence hall in 2018.

That incident, in which undergraduate Monica Baey was filmed showering by a fellow NUS student, led NUS to tighten security on its campuses and review its disciplinary and support frameworks.

Court documents also state that Joel had recorded two upskirt videos of a female colleague at work during an internship in 2016.

Urging the court to impose a jail term of 12 weeks and a $1,500 fine, DPP Ong said in his written submissions that the offences were committed over three years and involved multiple victims.

"The accused's criminal actions increased in severity from recording upskirt videos of female strangers in public places in May/June 2016 to recording videos of fellow NUS residents residing in NUS halls showering naked in the female toilet on 'female-only' floors in March 2019," the DPP said.

Joel's lawyer, Mr Malcolm Tan, said in mitigation that his client was extremely cooperative with the police during investigations.

Mr Tan also said he would apply to the Institute of Mental Health for a report on the likelihood of his client re-offending.

For each count insulting a woman's modesty, Joel can be jailed for up to a year and fined.

He can also be jailed for up to three months and/or fined up to $500 for criminal trespass.

In a statement on Friday, NUS said it had convened a board of discipline (BOD) in June 2019 to look into the offence committed by the student in May that year.

"The BOD imposed a range of disciplinary sanctions on Joel, including suspension for three semesters, mandatory counselling and rehabilitation sessions," it said.

The university also said that he is currently serving the suspension and is not allowed on campus.

It will also look into whether there were other offences that Joel had committed but were not disclosed to the university.

"Should new information on other offences be disclosed in the court proceedings, NUS may convene another BOD to inquire into these other offences," added the university.

"NUS has enhanced the disciplinary framework for sexual misconduct offences since June 2019, including suspension and expulsion, as well as safety and security measures."

The university said that it is also providing greater support for victims of such offences, and has introduced training for all staff and students to build a culture of respect.