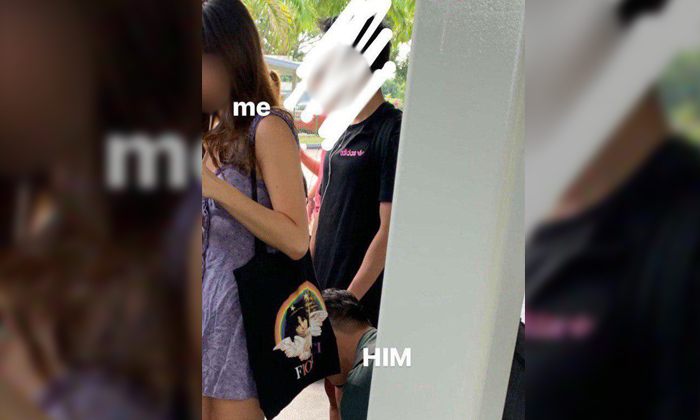 A National University of Singapore (NUS) student was allegedly stalked by a man who tried to take upskirt photographs of her outside Kent Ridge MRT Station on Wednesday.

She has made a police report on the incident.

Police confirmed the report was made and said investigations are ongoing.

The student posted on social media that another commuter told her the man had been following her and had at one point knelt behind her, appearing to tie his shoelaces.

Her posts included photos of a man in a green shirt, one of which shows him kneeling behind her at a bus stop near the station.

The commuter also told her that he had seen the man taking photos of her while they were on the train.

She said the man vanished after the commuter approached her.

Mr Kenny Leck, the owner of BooksActually, who shared the student's screengrabs on Facebook, said the man had allegedly tried to take upskirt photos of her at about 9.50am.

Responding to queries from The New Paper, an NUS spokesman said the student reported the incident to the NUS Office of Campus Security (NUS OCS) on Wednesday.

"NUS OCS has reached out to the female student, who declined the university's offer to provide her with support," she added.

"We understand that she has reported the matter to the police."

The spokesman said the school will keep in touch with the student and render assistance to her if required.

She said the safety and security of students remains the university's top priority.

"Security measures are in place to enhance the safety of our campuses," she said.

"Members of the NUS community are also encouraged to remain vigilant, and to report any suspicious activity to NUS OCS immediately."