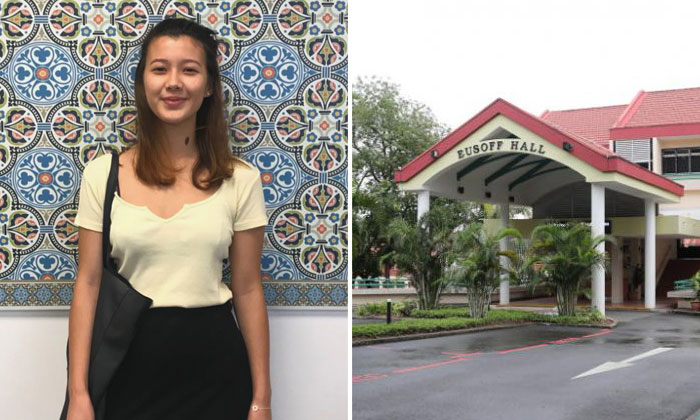 The National University of Singapore (NUS) has apologised for the way it handled the case of sexual misconduct that was brought to light by one of its students, Ms Monica Baey, whose posts on social media caused outrage both within and outside of the campus.

In an e-mail to NUS alumnus on Tuesday (April 23) seen by The Straits Times, the university's president Tan Eng Chye said: "We are sorry that she had to surface her concerns on social media for the university to take notice.

"We fell short in providing her support from the start, and we apologise. We hope to set things right. NUS does not condone nor tolerate any form of sexual misconduct on our campuses, and we will take a hard stand on unacceptable behaviour to keep our students safe."

Ms Baey, 23, a third-year NUS communications and new media undergraduate, had posted on her Instagram account how she had noticed an iPhone being held underneath the door after she finished showering at Eusoff Hall on Nov 25 last year. After a disciplinary process, NUS had asked the perpetrator, whom she revealed to be a chemical engineering student, to write an apology letter to her and undergo mandatory counselling

He was also banned from entering Eusoff Hall and suspended from school for a semester.

NUS has confirmed that the case was investigated by the police and the undergraduate was given a 12-month conditional warning, meaning that if he commits another crime during the period, he will be charged for that and the earlier offence.

It was after Ms Baey's post gained traction that NUS announced, on Saturday, that it was convening a committee to review its disciplinary and support frameworks. The committee will study the approaches taken by other international institutions, solicit views from various stakeholders, and share its findings and follow-up actions in the new academic year, which begins in August.

Later on Monday, the university also revealed how it handles sexual misconduct cases, laying out a "second strike and you are out" policy in which a student found guilty of sexual misconduct for a second time will be expelled. This policy, which will also be part of the review, has since been met with criticism.

MP Ang Wei Neng (Jurong GRC) described the offence as serious, and which warranted stiffer punishment, unless there were other mitigating factors. "The action taken by the university will need to be calibrated but it has to have sufficient deterrent effect on other students," he added.

"(The recent case) is a major offence and the punishment meted out should reflect the gravity," he said. "In this case, NUS has failed to send a clear signal and sets a precedent that a similar offence would get a person a conditional warning with a one-semester suspension."

He added that the university's disciplinary board should distinguish between minor and major offences, to ensure a balance between helping victims get justice and find closure, and exercising some compassion so that a young offender's future is not destroyed.

"The 'second-strike and you-are-out-policy' can apply to minor offences such as fighting in campus; being rude to lecturers; damaging common property and others," he said.

MP Louis Ng (Nee Soon GRC) also believes that the "two-strikes and you're out" approach to sexual offences is too light. He said: "The rules need to be reviewed so that there is a stronger deterrent and people know they can't get away with such offences."

The 23-year-old man involved in the NUS peeping Tom case was given a conditional warning by the police for filming a...

ST also spoke to more than 20 undergraduates from NUS, Nanyang Technological University (NTU) and Singapore Management University (SMU), most of whom felt that the punishment meted out in this case was too lenient.

Ms Debbie Ng, 22, a final-year communications student at NTU, said that such a policy gives the impression to perpetrators "that you can keep doing it until you get caught because you'll get a second chance anyway".

Ms Kimberly Gwee, a Year 4 student at SMU's School of Information Systems, said the onus is on NUS "to provide a safe space for students to learn and partake in university life".

"Why does it have to take two victims before appropriate justice is handed to one offender?" the 24-year-old asked.