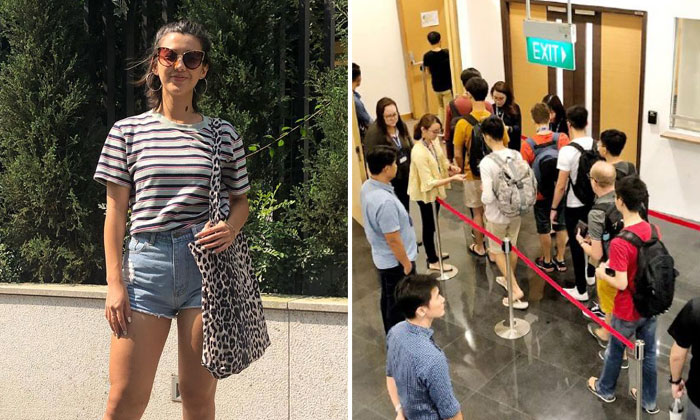 The National University of Singapore (NUS) on Thursday acknowledged that it had failed undergraduate Monica Baey, who was filmed by a male student while she was showering in a resident hall.

Giving a strong assurance that the university will adopt a tougher stand against sexual misconduct, its management also said that immediate action will be taken to set up a victim support unit and to improve campus security.

At a packed campus townhall on Thursday evening (April 25), attended by around 600 students who had to spill into a second auditorium, questions were asked about the university's "two-strikes and you're out" policy, which has come under criticism since it came to light.

Ms Baey, 23, who had flown back from Taiwan where she had been on an exchange programme, was the first to speak.

She described the lack of support she got from the university following what happened, and the lack of communication through the disciplinary process.

She said that the university left her to deal with the police. Follow-ups with university staff were done over the phone, instead of face to face, and even then, she was provided with "incomplete information".

"My first statement was taken by a male officer, which I understand is the case in night-time cases. I can't imagine how victims of more serious sexual assault would feel," she added, as the crowd applauded.

Apologising for the inadequacies, NUS vice-provost (student life) Florence Ling said that victims like Ms Baey should not have been "made to walk alone and (be) wondering what is happening".

"When you went through the difficulties you faced, from a lack of victim support right up to the sanctions, I can feel that we have failed you. I really, sincerely, say I am sorry," she said. The university had earlier in the week said it will set up a committee to review its disciplinary and support frameworks.

Last week, Ms Baey, an NUS communications and new media student, took to Instagram to publicise how she been filmed in the shower at Eusoff Hall last November by a male student, whom she revealed as Mr Nicholas Lim, a chemical engineering student.

A police report was made and the police gave the man a 12-month conditional warning.

NUS also made him write her an apology letter, undergo mandatory counselling, banned him from entering Eusoff Hall and suspended him for a semester. Ms Baey said the sanctions were a slap on the wrist.

Her posts started a national debate on whether NUS should get tougher over sexual misconduct cases.

The 23-year-old man involved in the NUS peeping Tom case was given a conditional warning by the police for filming a...

At Thursday's townhall, Ms Baey urged NUS to set up a separate office to deal with sexual assault, which should provide emotional and administrative support, along with a 24/7 hotline.

She also said that NUS should consider suspensions for up to two years, and that offences be recorded in a student's record. She also suggested "no-contact conditions" between victims and perpetrators.

The townhall was called to address concerns students and staff had in the wake of the incident, and was led by Prof Ling, Associate Professor Peter Pang, who is dean of students, and Ms Celestine Chua from the University Counselling Services.

They said that a victim support unit would be set up quickly.

Students applauded several times during the dialogue, which was open only to them and staff, especially when undergraduates came forward to share their own experience of sexual assault in campus.

One female student recounted how she had been interrogated by university staff and accused for being "inconsistent" in her statement. According to her, the case was dropped a month later as there was no evidence, and the male offender has since graduated.

Issues like a lack of security in the halls were also raised. There was also a call for the university to be more transparent and open about sexual misconduct cases, so they can serve as a deterrent.

One student asked if NUS would relook its punishment for Mr Lim, and if it would expel him, while another asked if the review committee would adopt a "zero-tolerance" policy, to send a message that it takes sexual assault cases seriously.

In response, Prof Ling and Prof Pang both said that the university would have to wait for the review committee to decide on these matters.

Some students also urged the NUS to include students in policymaking regarding sexual harassment.

One student said he did not think victims should have a say in sentencing as this would suggest a crime was more serious if a victim was more articulate, and added he hoped the review committee would remain unaffected by public sentiment.

Said Prof Pang: "The review committee has a very difficult job to do, let's give them some patience, you want them to do a thorough job, and they will leave no stone unturned."

Admitting that NUS can do better, he said: "We acknowledge that the university has let you down. We have not met your expectations. We need to create a safer environment for all of us. There have got to be changes, this cannot go on. We have to take a tougher stand."