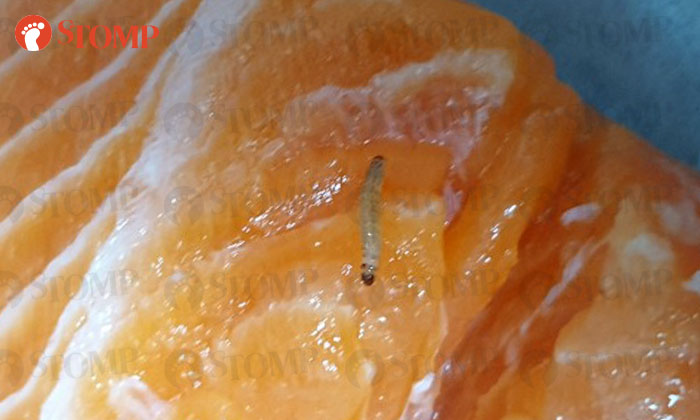 A worm was found wriggling on raw salmon which Stomper Jeffrey bought on Saturday (Jan 12).

He and his family went to NTUC FairPrice Finest at Bedok Mall and bought the packet of salmon for $12.85 at about 7.03pm.

When they arrived home and took out the salmon to be prepared for dinner at about 8pm, Jeffrey's wife and daughter were shocked to find a worm on it.

Jeffrey told Stomp: "My wife and daughter called me to the kitchen to look at the worm.

"We were very disgusted by it and I was concerned because of the recent influx of food safety issues on the news.

"My wife wanted to throw it away, but I suggested we take it back to the supermarket to ask for an explanation and compensation."

Before that, Jeffrey made sure to snap a picture and video of the worm, which he sent to Stomp.

Jeffrey said he and his family went back to the supermarket and he spoke to a staff member.

"The staff member wanted to exchange the salmon for a new packet, but as we were still traumatised, we asked for a refund instead.

"They provided us with a full refund and we went home."

In response to a Stomp query, a FairPrice spokesman said: "NTUC FairPrice is committed to upholding a high level of food safety standards and the farmed salmon products we offer comply with internationally recognised food regulations and standards.

"We have offered an apology to the customer for the unpleasant experience and have provided a full refund for the product last Saturday (12 January 2019).

"This appears to be an isolated incident as checks on existing stocks did not reveal any anomalies and we have not received any similar feedback recently concerning the product in question.

"We take the opportunity to assure customers that food safety and quality are of paramount importance to FairPrice.

"Customers who find the quality of our fresh produce unsatisfactory can return the product to the same store with their receipt for a full refund or exchange."

In an update to their statement, FairPrice added: "Food safety is of paramount concern to FairPrice and we have since engaged an entomologist to ascertain the type of insect found on the salmon product as part of our investigation into this matter.

"The findings reveal the insect to be the larva of a moth or butterfly, which feeds on fruits and vegetables.

"As such, we are unable to conclusively ascertain how this insect was found on the salmon as claimed by the customer.

"Fruits and vegetables are also sold at a separate section at the supermarket in question.

"Existing stocks did not reveal similar anomalies and we have not received any similar feedback recently concerning this salmon product."

NTUC FairPrice can be reached at its Customer Relations Hotline at 6552 2722 or through email at general.feedback@fairprice.com.sg.

Related Stories
Irvins Salted Egg apologises and offers refunds after 'fried gecko' found in packet of its salmon fish skin
Bug found in coffee from Selegie cafe: 'I spat out what looked like bits of cockroach'
"Black thing" in man's soup turns out to be cockroach: "I thought it was herbs at first"
More About:
food
food safety