NSFs complain about being 'forced' to download SGSecure app, citizens give it 5-star reviews 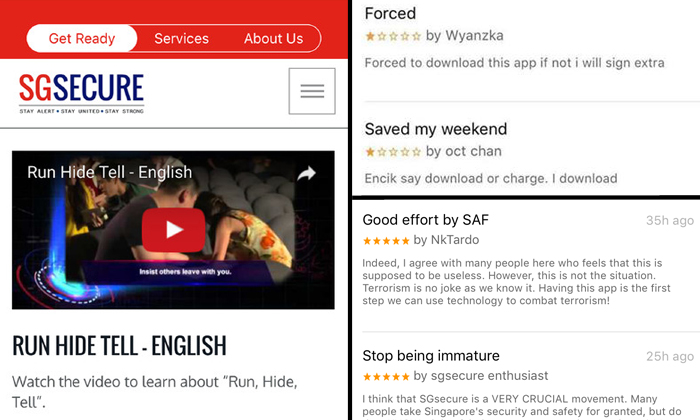 The SGSecure mobile application had earlier received a flood of one-star reviews from disgruntled national servicemen (NSFs) -- but netizens have responded by defending it through five-star ratings.

In case you have not heard, the app from the Ministry of Home Affairs (MFA) allows users to get important alerts informing of nearby emergencies and even terror attacks in the region.

And while it might sound useful to you, many NSFs begged to differ.

Although they begrudgingly downloaded the app, they also left scathing reviews about how they were "blackmailed" and "forced" to do so -- or risk being punished.

According to these reviews, the punishments ranged from "getting charged", having to do extra duty and not being allowed to book out, though it is unclear how true these claims are.

One user, Twig Ng, wrote in his review: "Later during morning RO, my Encik will check if everyone downloaded this app. No download no book out."

Other sentiments, screenshots of which have gone viral online, include, "PC said this weekend want go home then download this app and show him" and "Encik say download or charge. I download."

However, many citizens have come to SGSecure's defence and said the NSFs are overlooking the purpose of the app.

A netizen known as senchou555 said in his five-star review: "Kids nowadays won't understand the importance of being vigilant and having the means to communicate and get information in the event of an emergency.

"All they know is to complain and do things their way."

A few also pointed out that people tend to take Singapore's safety for granted and that terrorism is "no joke".

"Having this app is the first step we can use technology to combat terrorism!" added one user, who praised the Singapore Armed Forces (SAF) for their efforts.

Musicgeek621 said, "Before the launch of this app, I have always treated NS as a two-year service. After downloading the app, I have changed my mindset on NS completely."

In response to the controversy, the Ministry of Defence (Mindef) said that downloading SGSecure is a must for all Mindef and SAF personnel, and that it is part of a counter-terrorism training programme being implemented in phases.

It said in a statement: "In the first phase, Mindef/SAF personnel are required to download the SGSecure mobile application and complete the e-learning modules embedded within.

"Subsequently, Mindef/SAF personnel will be put through scenario-based community response training, to provide them with the knowledge to protect themselves and those around them in the event of a terror attack."

Check out the range of reviews, both positive and negative, in the gallery above.

Related Stories
RSAF's Mannequin Challenge is really 'Above All': Checkout what the cool airmen did
Terrex case: Ship captain charged with not having licence
SAF soldiers caring for canine comrade is proof of what makes S'pore so great
More About:
Army
soldier
SAF
mindef
controversy
app
SGSecure
NSF
national service