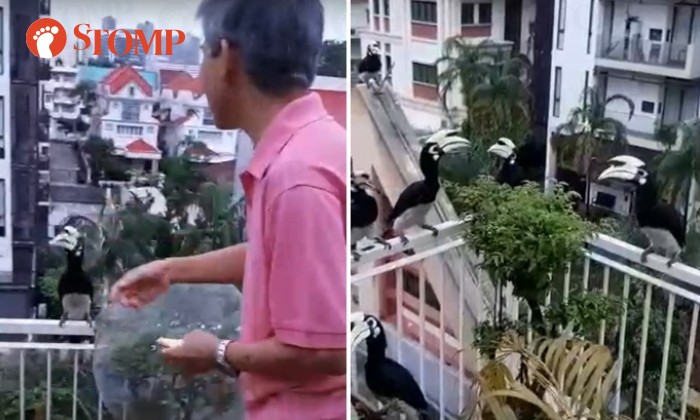 The National Parks Board (NParks) is investigating an incident where a man was seen on video feeding wild hornbills perched on a condo balcony.

The video, which seemed to have been taken someone known to the man, went viral after it was circulated on WhatsApp multiple times.

While the location and exact date of when the video was taken still remain unknown, it seems that the footage of the man feeding the hornbills surfaced online during the last week of December.

Stompers Mike, Janet and Ruth caught wind of the circulated video and shared their concerns about the situation as feeding wild animals is prohibited in Singapore.

In the video, the sound of birds can be heard in the background as hornbills fly towards the balcony and perch themselves on the ledge.

A woman behind the camera says: "How many of them altogether? I think more than ten."

A man wearing a pink shirt proceeds to feed the hornbills by taking what appears to be bread pieces and tossing it towards the birds.

As the birds catch the food with their beaks, they are met with approval from the woman behind the camera: "Wow, very good."

More birds start to fly onto the ledge as the feeding continues. At that point, about eight hornbills can be seen perched on the balcony ledge.

The camera then pans upwards and shows two more hornbills perched on the rooftop.

"My goodness, more than 14 ah," says the woman, as the camera moves towards the right to show three more hornbills catching the bread pieces with their beaks.

The woman then adds that they "don't have to go to Jurong Bird Park" as the man continues tossing food to the hornbills.

Mike, who came across the video after it was forwarded to him on WhatsApp, said: "I know wild animals cannot be fed. But what if they come to your house? I'm unsure if that is allowed."

Janet, who also received the video on WhatsApp, told Stomp: "I hope this man gets a warning that wildlife should not be fed! It's best to admire them from afar, not feed them directly like this."

Ruth echoed the same sentiments as Janet and expressed her horror when she saw the video: "I think NParks should investigate this incident! Isn't it against the Wildlife Act?

"Feeding wild hornbills like this is not right as it encourages them to be dependent on humans.

"I mean, it is nice to having wild animals living in our midst and I doubt the people involved meant any harm.

"But I hope people can avoid feeding them, especially if they are not urgently in need of rescue or care. The law is there for a reason, isn't it?"

In response to a Stomp query Dr Adrian Loo, Group Director of Wildlife Management at NParks, said: "We take a serious view of the feeding of wild animals. One of the main reasons why wildlife approach humans is due to feeding."

Dr Loo added that feeding, intentional or otherwise, alters the natural behaviour of wildlife, and habituates them to human presence and reliance on humans for an easy source of food.

Wildlife may have an increased propensity to approach humans when they associate humans as food providers.

This may lead to the wild animals venturing into urban areas in search of human sources of food, wandering onto roads posing a potential danger to motorists and to themselves and displaying aggressive behaviour towards people they may come across.

Dr Loo explained that the population and distribution of wildlife is regulated through the resources available in the natural environment, and that feeding causes an artificial increase in food which may result in an unnatural and unsustainable increase in populations

"This action contributes to increased human-wildlife conflict and also upsets the ecological balance. Furthermore, many animals fulfil ecological roles such as pollinators and seed dispersers, and these processes are disrupted when they rely on humans for food instead," said Dr Loo.

"Additionally, feeding wildlife with processed foods can also cause health problems to the animals, as the food is not suitable for them. Wildlife may also lose their natural foraging skills and struggle to survive in their natural environment when there is no readily available food source.

"NParks is aware of the incident where a man was filmed feeding a group of hornbills at his balcony ledge. We have identified the man and are currently investigating the matter."