Not cool: Some shocked that cup of hot water costs $0.60 at People's Park Centre 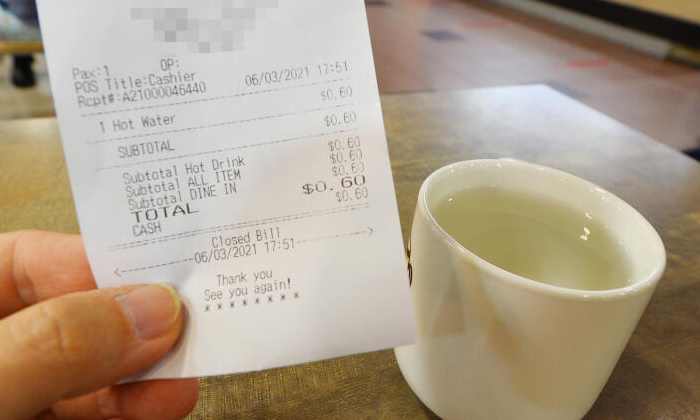 Would you pay $0.60 for a cup of plain water at People's Park Centre?

Some patrons were shocked by what they thought was a ridiculous price, while others felt that this was acceptable if you considered all the factors.

Ms Wang, 66, told Shin Min Daily News that she had been having tea with some friends at a food centre located on the ground floor of People's Park Centre.

She also purchased a cup of hot water from the drinks stall, only to realise that it cost $0.60.

She said: "I am a regular patron and tea usually costs slightly over a dollar, so I didn't expect hot water to be so expensive."

According to her, a large cup of hot water typically costs $0.40 at food court chains in shopping malls while other coffee shops usually charge $0.30.

Another diner who was interviewed also felt that $0.60 for a cup of hot water was too expensive and said that he would definitely not buy it.

He added: "I usually bring my own water, but if other people really need hot water, then they have no choice (but to buy it)."

A visit to the two food centres on the ground floor of People's Park Centre found that both drinks stalls charged $0.60 for hot water. However, cold water costs $0.60 at one stall and $0.80 at the other stall.

A worker at the second stall explained that this is because the cold water was packed in large plastic cups and came with ice cubes.

There is also a coffee shop chain just one floor up that sells hot water for $0.30 and cold water for $0.50, reported Shin Min.

Patrons, many of whom are elderly, do not seem to mind the prices, however. They bring their own tea bags and hang out for hours, and therefore find it reasonable to pay for the hot water.

The higher-than-average prices can be attributed to People's Park Centre being located in a tourist area, the air-conditioning, as well as the high cost of rent and utilities.