Not advisable to move injured boar from busy expressway: Acres responds to video 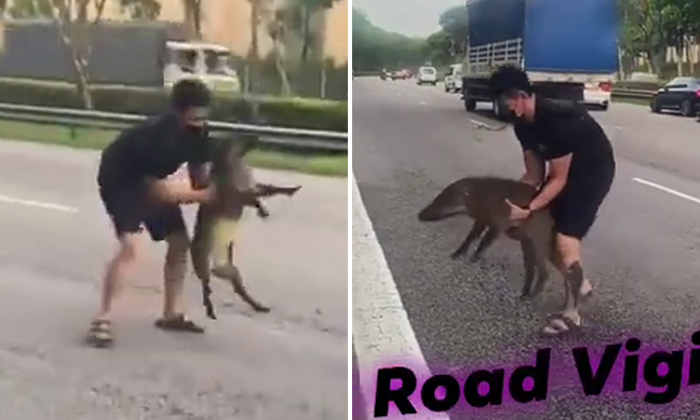 The public should not move injured wild animals surrounded by busy traffic at the expense of their own safety, said an Animal Concerns Research and Education Society (Acres) spokesman.

His comments on Wednesday (Feb 23) came after a good Samaritan was filmed shifting an injured wild boar hogging an expressway, sparking praise from netizens.

While well-intentioned, this act of bravery could have hurt him if the powerful animal had turned on him, the spokesman told The Straits Times.

A 29-second video uploaded on Facebook page SG Road Vigilante on Monday shows the boar sitting in the middle of the road while the man prompts it to move.

He then picks up the boar just as two motorcycles move towards it. But the animal writhes out of his grasp, staggers on its hind legs and collapses onto the expressway.

In a second attempt, the man successfully carries the boar and deposits the struggling creature on a road shoulder.

Some netizens who saw the video said the animal looked injured and needed a veterinarian, or the help of wildlife rescue groups to help it recover.

Though what the man did is "commendable and heartwarming", said the Acres spokesman, his actions are not advisable as the situation could have turned ugly if the powerful animal had reacted differently.

"Wild pigs can turn defensive when they are scared," he noted.

In this case, the boar seemed to be dazed and in shock, which explains why the man could carry it to safety, the spokesman said.

While Acres did not handle the incident, he said mammals like wild boars are prone to shock, and fractures and grazes are common when they get into traffic accidents.

If members of the public encounter injured animals on roads, they should always put their safety first, and they can do other things such as controlling traffic or calling for assistance, he added.

Motorists can also play their part to curb roadkill by being more vigilant, especially when driving in areas where wildlife are known to cross.

Traffic accidents have killed many animals in Singapore and this figure may rise as urbanisation further fragments green spaces, forcing more wildlife to cross roads.

In August last year, a critically endangered Raffles' banded langur was struck by a vehicle in Upper Thomson Road. The rare primate can be found only in Singapore and southern Peninsular Malaysia.

Between January 2020 and December 2021, a critically endangered Sunda pangolin and six other animals were killed in Mandai Lake Road.

To curb a potential rise in roadkill, the Acres spokesman called for further studies to be done to identify hot spots for roadkill and more road-calming measures to be introduced.

"Future developments should also take movement of wildlife into consideration in order to mitigate such cases," he added.