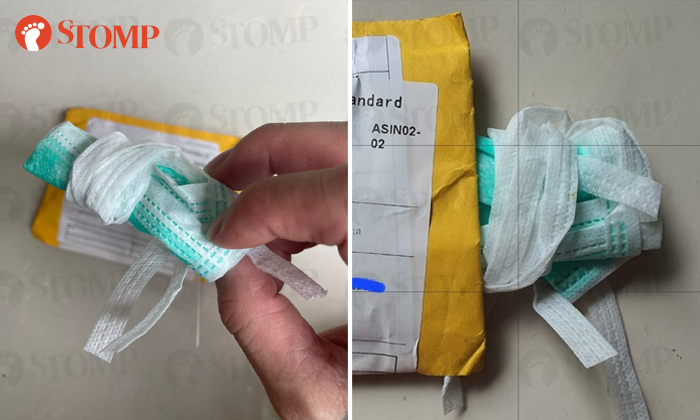 Not one but two Lazada customers were dismayed when they opened their parcels and found a used face mask instead of their purchases.

They shared their experiences with Stomp after reading about a Shopee user who had ordered a $39.90 stepladder but received a piece of cardboard instead. The seller has since been suspended by Shopee.

Stomper Hefferich said he bought a set of shuttlecocks for $22.18 via Lazada, only to receive a used face mask.

Hefferich recounted: "Apparently, the seller was not able to send the shuttlecocks as their factory was shut down due to the recent Covid-19 restrictions in Shanghai.

"They messaged me to cancel my order but I was not able to get back to them immediately, so they sent out a used PPE mask instead. I'm not sure if it was to spite me for not reading their message and canceling my order or if it was meant to be a joke.

"Sellers have to send out orders within three days or they will be penalised by Lazada. So in order to fulfill their obligations, they sent out a random item.

"I was shocked when I opened the parcel and found a used PPE mask. I quickly washed my hands.

"To add to my frustration, Lazada requires me to return the item delivered in order to process my refund. I cannot comprehend why they would want to waste time and money to come and collect a used mask even though I have submitted photographic evidence of the wrong item being delivered.

Separately, Stomper Kohji placed an order for a $44.80 wall clock but was sent a used face mask by the seller.

He said: "My request for a refund was rejected and there is no way to reach Lazada. They even stated in the rejection reason that it is not under Lazada policy. Till now, Lazada is not doing anything." 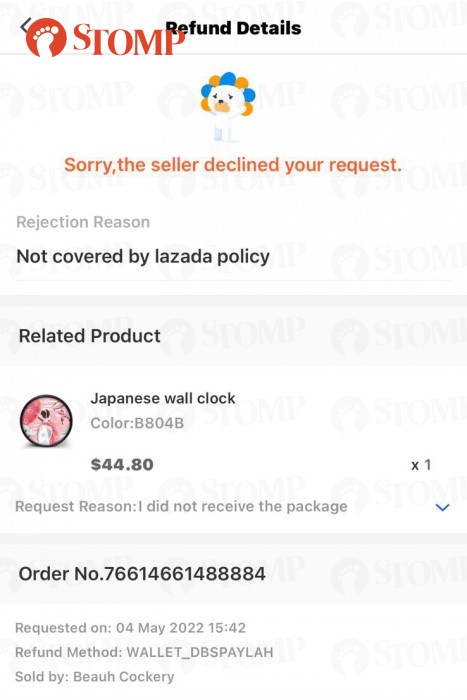 This is not the first time Lazada users have reported such issues with sellers on the e-commerce platform.

Earlier in February, one Stomper received three pieces of cardboard instead of the spray guns that he paid for, while another ordered Nike shoes but was sent a pair of no-brand socks.

Related Stories
Shopee seller suspended after sending customer cardboard instead of ladder, says he was on MC
Cabinet bought via Lazada gets covered in mould within a month
Stomper orders Nike shoes via Lazada but receives a pair of no-brand socks
Man receives 3 pieces of cardboard after ordering disinfecting spray guns on Lazada
More About:
online shopping
expectations vs reality
bad service
lazada