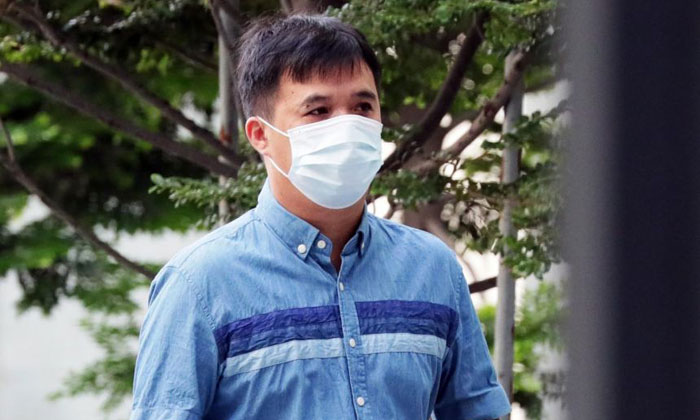 A man working as an operations support officer in a primary school took a liking to an eight-year-old boy he found "cute and adorable".

Chong Choon Ying hugged the pupil in school on numerous occasions when no one else was around.

In early 2017, he wrapped his left hand around the boy's shoulders and used his other hand to touch the boy's groin.

The boy did not tell his teachers or parents about this at first as he thought no one would believe him.

He finally broke his silence about two years later and told his father about what Chong had done to him.

Chong, a 48-year-old Singaporean, pleaded guilty on Tuesday (April 6) to a molestation charge and was sentenced to 14 months' jail and one stroke of the cane.

A second molestation charge was taken into consideration during sentencing.

The boy cannot be named because of a gag order to protect his identity, and details about the school have been redacted from court documents.

Deputy Public Prosecutor Heershan Kaur said Chong had spotted the boy at his workplace while carrying out duties, which included maintenance work and locking up the classrooms after school hours. He started hugging the boy soon after.

The DPP said: "According to the accused, he would not approach the victim when other persons were around as he felt they may not feel comfortable about him hugging the victim.

"Some time between January and March 2017, the accused saw the victim alone, wandering aimlessly in the school compound. He then approached the victim and asked the victim for a hug, during which he opened his arms and gestured the victim to come closer."

A police report was made three days later.

DPP Kaur urged the court to sentence Chong to at least 18 months' jail, with three strokes of the cane.

She stressed that the victim was only eight years old at the time and Chong had abused the trust placed in him.

For molesting a child below the age of 14, an offender can be jailed for up to five years and fined or caned.

Related Stories
SMU molestation trial: Accused says 'only both of us know how we were getting more intimate'
SMU molestation trial: Accused says victim was coy and didn't really mean 'stop' when she told him to
Married man who repeatedly molested sleeping sister-in-law gets 14 months' jail
More About:
molest
outrage of modesty
primary school
student
court