No sweet surprise for woman who finds screw in her waffles 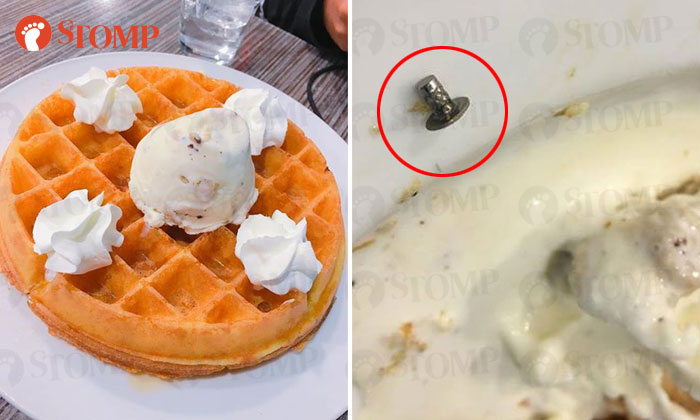 Stomper Keela was reminded of her mother's saying to "chew your food properly" when she found an unwanted surprise in her waffles last Friday (Oct 13).

She decided to take her niece to Gelare at Tampines 1 for a sweet treat on her off day.

They ordered a plate of waffles with ice cream and whipped cream on it and were savouring their meal when suddenly Keela crunched down on something.

"For a moment, I thought it was the chocolate bits from the ice cream, but as I felt it roll against my teeth, something did not sit right and I naturally spat it out onto my palm and horrifically found that it was a freaking screw!" exclaimed the Stomper.

"Pardon my expression, but I was really shocked and it made so many things run through my mind like, what if I had really gone ahead and crunched my teeth down on it? Or what if it was my younger niece had it instead? Or someone else's kids?"

She called over a waiter and told him what happened.

He snapped a photo of the dish and the screw and went back to the kitchen after offering to give Keela a new plate of waffles.

"I declined twice because that was not my intention and also, I don't think I would want to continue sitting there chewing my food and doubting myself if I should swallow every mouthful I took."

The waiter returned and informed Keela that he had identified the screw had come from the whipped cream bottle and apologised to her once again.

Keela was not angry with the staff but wanted to use her experience as a reminder to others:

"It could happen in any cafe, any kind of food, to anyone at all. Moral of the story: Chew your food properly."