No price hikes in 20 years: Cai png stall still charges $2.50 for 3 dishes so elderly can afford a meal 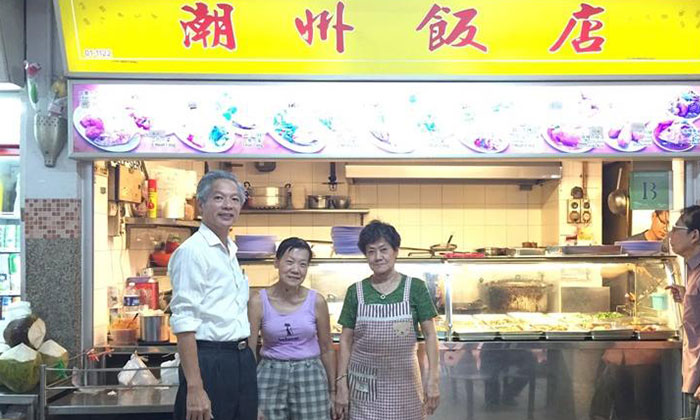 An economic rice stall at People’s Park Complex has not increased its prices for over 20 years, insisting on following through with the founder’s principle of remaining affordable for the elderly.

Now under its third generation ownership, “潮州饭店”, which translates to Teochew Rice Store, has been in operation for nearly 50 years and charges merely $2.50 for three dishes.

The son of the original founder, Mr Chen Si Ba, 63, told Shin Min Daily News that the stall used to be located in Serangoon, and was called “小海鲜餐馆”, or Small Seafood Restaurant.

“Our family grew up in a poor neighbourhood. Later, we opened up a small restaurant outside our house.

“We sold mainly yam paste, seafood and a variety of other dishes. All 10 siblings, including me, would come and help out at the stall after school.

After the land was acquired in May 1969, we moved to Chinatown.

Mr Chen professed that he works at the stall over 12 hours a day, to ensure that the traditional flavours passed down by his family are not compromised.

He said that all his siblings know how to prepare Teochew dishes.

His second eldest sister, Ms Chen Miao Lan, 69, went to work at the stall even before completing her primary school education.

She would work from sunrise to sunset every day.

Even now, she works 12 hours a day at the stall.

“My father couldn’t work anymore after suffering a stroke in 1976. He passed away four years later and left the stall to my second eldest sister.

“My third sister, Ms Chen Xing Lan, would also help out at the stall. The other siblings still come down from time to time and help out when they are free.

“This stall has kept at least five families alive.”

Unwilling to see his mother work so hard, Ms Chen Miao Lan’s youngest son, Mr Ceng Wan Wan, 31, decided to give up a job in the information technology (IT) sector so he could help out at the stall.

Mr Chen Si Ba recalled that 50 years ago, each plate of rice was sold for 30 cents.

Even with the ever-increasing rent and price of ingredients, the stall has insisted on keeping their prices the same.

“However, we insist on not raising our prices so that the elderly in the area can continue to afford a meal here. We still keep it at $2.50 for three dishes.”