'No home to return to': Mum after 100kg false ceiling collapses in master bedroom 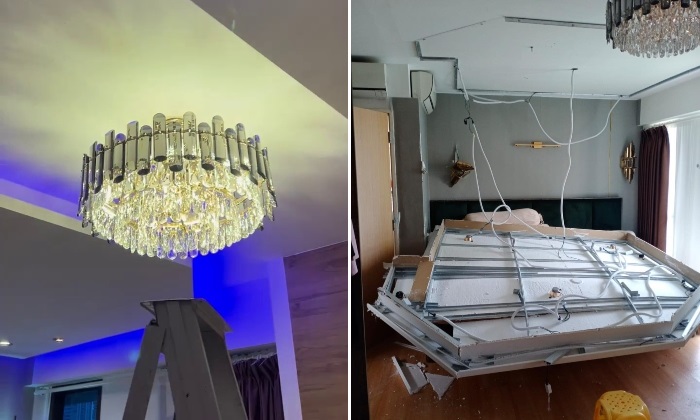 The false ceiling of the master bedroom in a Dawson Road flat collapsed, falling onto a king-size bed and a single bed on Wednesday evening (June 8).

Fortunately, no one was on the beds at the time of the incident. Madam Wendy Liu and her husband, Mr Vincent Chang, had gone out with their three sons, aged one, two and eight.

While they were out, Madam Liu, 40, received a text message from her maid at home telling her that the false ceiling had collapsed.

Sharing photos and a video of the collapsed false ceiling on Facebook the next day, she said in a post: "I can’t imagine what will happen to me and my kids. My little babies. This happened yesterday evening at 6.15pm.

"Normally at this time, I would be on the bed, which was just below the ceiling, playing with all my boys. Fortunately, I was at the park taking pictures of my three little boys... Else I don't think we were able to survive. Thank god.

"My room was just renovated six months ago and I was still happily sharing with my client about my excitement back then, but now it became a nightmare for me!"

The whole ceiling drop !!!!! Luckily my three kids n babies is fine.God bless . What should I do now!

Madam Liu, who runs a wellness centre, and her family have been living in the flat for five years and renovated it in January, which included adding the false ceiling.

SR Tech Engineering, the contractor that carried out the renovation, had posted a video of the completed false ceiling on its Facebook page on January 9.

100kg false ceiling crashes down onto beds in Queenstown flat: Here's how it looked like before the collapse https://bit.ly/3NGNQZo

According to The Straits Times, the structure was supported by only four small screws.

Since the false ceiling collapsed, the family have been put up in a hotel arranged by SR Tech Engineering while it fixes the damage in the flat, reported Shin Min Daily News. It has also offered to pay $1,600 in compensation.

"I'm still in fear," Madam Liu told Stomp a day after the collapse.

Asked when she plans to return to her flat, she replied in Chinese: "No home to return to. (I) can’t bear it."