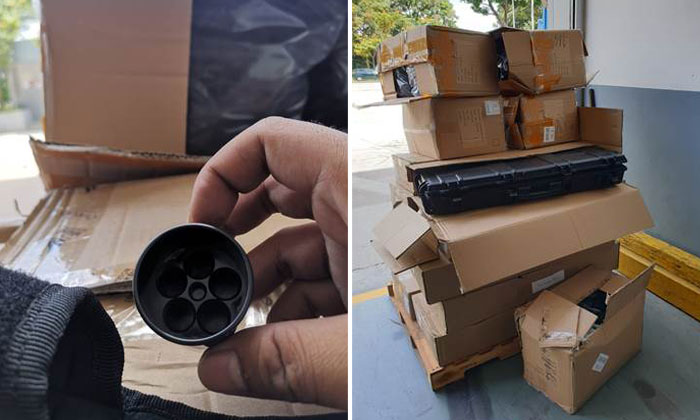 A speed loader is a device used to quickly reload a firearm.

The ICA said in a statement on Facebook that officers noticed anomalies in the scanned images of a container with a consignment declared as "assorted cargoes".

"Sensing something amiss, the officers conducted unstuffing operations at the importer's premise and uncovered 1,000 units of speed loaders, which were not declared in the import permit," ICA said.

The case was referred to Singapore Customs for investigations.

ICA said it will continue to conduct security checks at the checkpoints to prevent attempts to smuggle in desirable persons, drugs, weapons, explosives and other contrabands.

"The same method of concealment may be used by terrorists to smuggle arms and explosives to carry out attacks in Singapore," it said.

Related Stories
God of Fortune not smiling down on smugglers who hid cigarettes in figurines at Woodlands Checkpoint
2 Indonesian men nabbed for unlawful entry into Singapore and possession of duty-unpaid cigarettes
Company fined $25k for illegally importing meat products from China
More About:
ICA
illegal
smuggling