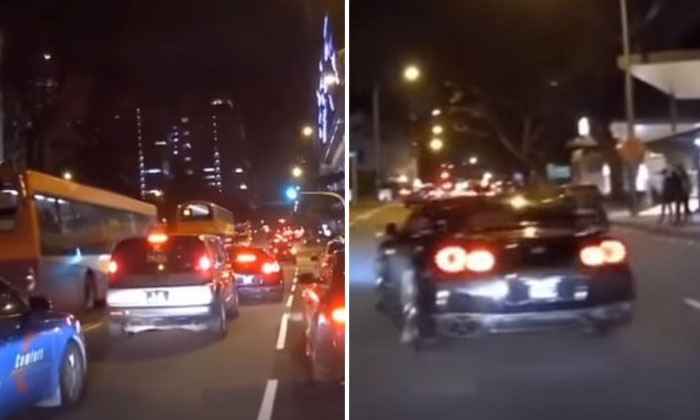 A Nissan GTR was caught on camera swerving and abruptly stopping in the middle of Penang Road to Exeter Road, apparently to block a driver behind.

Stomper Arjun alerted Stomp to a video of the incident posted by SG Road Vigilante.

According to the timestamp on the video, it took place on Jan 11 at about 10.11pm.

The Stomper said: "When I watched the video, I felt that the driver caused a lot of problems on the road and put other motorists in danger."

"Regardless what happened prior to the footage, such reckless actions that endanger other road users are uncalled for."

The video starts with the black Nissan filtering speedily from the leftmost lane to the rightmost lane.

The vehicle then stops moving despite the green light to pass and swerves into the middle lane on its left.

It stops and this disallows the cars behind it to pass.

A car on the rightmost lane wanted to filter left, however, it could not.

A series of horns are blared over the classical music playing in the vehicle with the in-car camera.

The Nissan still does not budge. A space big enough for two to three vehicles is left in front of it.

The lights turn red and the vehicles blocked switch lanes in order to pass later on.

The vehicle with the in-car camera turns to move to the leftmost lane and stops behind a taxi.

The Nissan then turns slightly, seemingly trying to cut in front of the vehicle.

The lights turn green again and the latter turns left into another lane, where the lights are red.

The Nissan follows suit and stops just next to the vehicle.

It again leaves a space in front of it.

When the lights turn green, the vehicle is blocked slightly by the Nissan and has to move into the first lane on his left before proceeding.

The Nissan speeds up in front of the vehicle and drivers in between the first and second lane while turning right.

After it speeds up and cuts in front of the vehicle once again, it zigzags between the two lanes.

Beeps of a horn can be heard in the background.

Suddenly, the Nissan abruptly stops and blocks the vehicle.

The vehicle driver jams on the brakes and reverses to try and continue driving, but to no avail.

However, just as it had done before, the Nissan abruptly stops and the vehicle driver jams on his brakes.

The Nissan speeds up in front and the video ends.