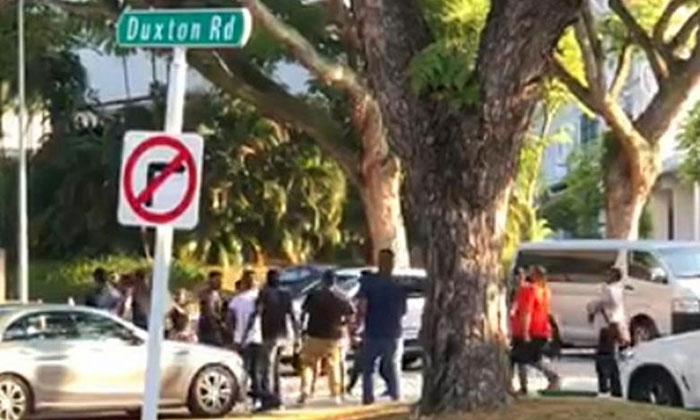 A group of about 20 men and women were captured on video in a confrontation at a carpark at Duxton Hill yesterday (July 14).

Nine men have been arrested for rioting.

Videos of the incident shared with The New Paper showed the group arguing outside a bar near the carpark yesterday.

Several men could be heard shouting aggressively amid screams from one of the women.

A woman, who wanted to be known only as Miss Mon, was at work in a nearby shop when she heard the commotion.

"My colleagues and I came out and saw the whole group pushing each other and we were wondering what was happening," the 25-year-old said.

"This doesn't happen and it's usually very quiet around here."

The group of angry men and women later moved to the carpark, where at one point, one of the men is seen knocking over a rubbish bin.

Miss Mon said about six police vehicles arrived at the scene within five minutes and officers quickly detained the men.

A police spokesman said they were alerted to a case of rioting at 5 Duxton Hill at 5.48pm yesterday.

Nine men aged between 20 and 35 were arrested and police investigations are ongoing.