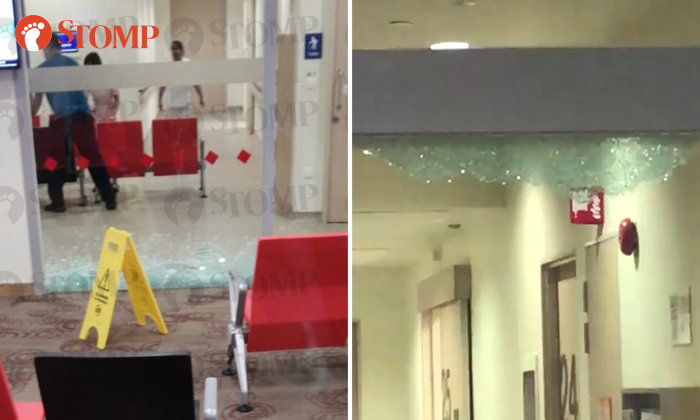 Patients and visitors were shocked when a tempered glass panel shattered in front of them at Ng Teng Fong General Hospital on Monday afternoon (Sep 2).

Stomper Revatthy said she and her family were at Clinic 52, Tower A on the fifth floor of the hospital at around 3pm when the incident occurred.

She recounted: "We were there for my mum's appointment when the glass door in front of us suddenly shattered with a blasting sound.

"My 11-months-old son was in his stroller, just a few steps in front of the glass panel. My three-year-old niece behind me started crying.

"Thank goodness nothing happened to them and the people around the glass panel."

According to Revatthy, who shared photos of the incident, hospital staff came to check if anyone was hurt and asked visitors to move away from the area.

Videos showing the broken glass panel and glass shards on the floor were posted by Facebook user Priscilla Ann, who said that the glass panel "came shattering down with deafening impact".

Hospital staff can also be seen moving some chairs and blocking off the area.

Revatthy added: "It's my first time encountering such an incident at this close distance.

"Though no one got hurt, it was still traumatising. Seriously no joke, it's super scary. Till now, it still bothers me and I'm scared to stand beside glass doors now."

In response to a Stomp query, a spokesman for Ng Teng Fong General Hospital apologised for the inconvenience caused and said it is currently investigating the incident with the manufacturer.

The spokesman told Stomp in a statement: "When we designed our hospitals, patient safety was our utmost priority. As such, tempered glass was deliberately chosen as it is a stronger type of glass which will crumble into small chunks and less likely to cause injuries as compared with regular glass which often breaks into sharp shards.

"When the incident occurred, our clinic staff immediately moved our patients and visitors to safety, and no injuries were sustained.

"We also quickly cordoned off the area and removed all the glass pieces."

The spokesman also assured patients and visitors that this was an isolated incident, adding: "We have since conducted safety checks on all glass doors/panels in our clinics to ensure that they are working well."