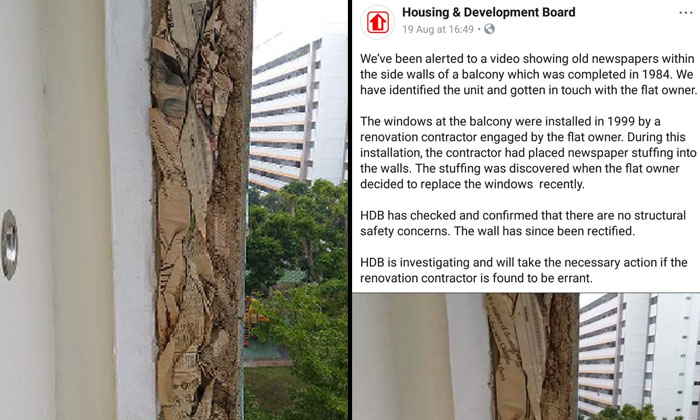 Netizens were concerned after a photo and a video showing newspapers being stuffed in a wall of an HDB flat was posted on Facebook recently.

HDB has responded to say that the newspapers were stuffed by a renovation contractor who was engaged by the flat owner in 1999.

However, the photo and video have been re-posted on Singapore Uncensored.

Several netizens had also expressed concerns about the flat's safety, worried that the shoddy workmanship might endanger residents.

HDB responded to Stomp on the same day at 7.26pm and referred us to their Facebook post that was put up at about 4.49pm.

HDB says that they have reached out to the owner of the unit and have checked and confirmed that there are no structural safety concerns. However, they will take the necessary action if the renovation contractor is found to be errant.

"We’ve been alerted to a video showing old newspapers within the side walls of a balcony which was completed in 1984. We have identified the unit and gotten in touch with the flat owner.

"The windows at the balcony were installed in 1999 by a renovation contractor engaged by the flat owner. During this installation, the contractor had placed newspaper stuffing into the walls. The stuffing was discovered when the flat owner decided to replace the windows recently.

"HDB has checked and confirmed that there are no structural safety concerns. The wall has since been rectified.

"HDB is investigating and will take the necessary action if the renovation contractor is found to be errant."