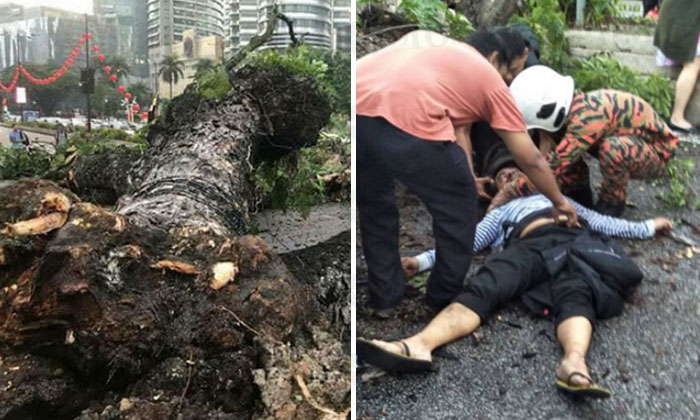 A 130-year-old tree fell near the Kuala Lumpur City Centre (KLCC) on Monday morning (March 5) at around 7.30am, injuring a motorcyclist and his pillion rider who had just gotten wedded.

According to the New Straits Times, Mira Ezva Abd Rashid, 25 and her husband, Norazrul Ahmad, 37, were returning from a mosque in Cheras after the wedding ceremony, when the tree came crashing down right in front of them.

They could not stop in time and crashed into the tree, sustaining injuries.

Although Mira's condition has since stabilised, her husband is still unconscious.

A Twitter post by the Kuala Lumpur City Hall (DBKL) read that the incident happened at Jalan Ampang heading towards Avenue K.

In a later statement by the DBKL, it said that the tree had fallen as its rotten roots had made it unstable.

The diameter meter of the tree was about 4.65 metres.

The tree also caused a gridlock in the city centre.

He added that work was being carried out by DBKL to clean the area of debris.

“It all happened in a flash... the tree fell right in front of us and my husband didn’t have enough time to avoid it or brake so we crashed right into it.

“I am just thankful that we weren’t killed, but my husband is still unconscious and I am worried.”

Mira said that even though she worked as a security guard at a shopping centre nearby, it was the first time she had used that particular section of Jalan Ampang.

“This is a tough challenge for me... we had only just gotten married. I hope my husband recovers.”