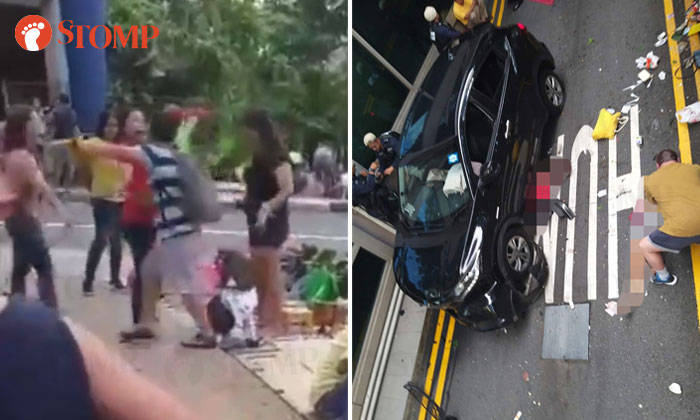 A video circulating online shows people dancing just before a car crashed through a railing and into six pedestrians outside Lucky Plaza on Sunday afternoon (Dec 29).

The video shows several people having a gathering before the crash. Stomp is not showing the full video due to its graphic nature.

The accident killed two women and injured four others.

The 64-year-old driver was arrested for dangerous driving causing death.

According to The Straits Times, all six of the women are Filipinas. A witness said the injured were having a picnic beside the railing when they were hit by the car.

Lucky Plaza mall is known to be popular with foreign workers, especially foreign domestic workers from the Philippines.

In another video, civilians rally to lift the car and pull a woman out from under it.

When Stomp visited the scene at about 7pm, the metal railing appeared to be severely damaged.

Five ambulances were dispatched by SCDF to the scene.

In response to a Stomp query, the police said they were alerted to the accident at about 4.58pm.

"Two pedestrians, aged 41 and 50, were unconscious when conveyed to Tan Tock Seng Hospital where they later died from their injuries," a police spokesman said.