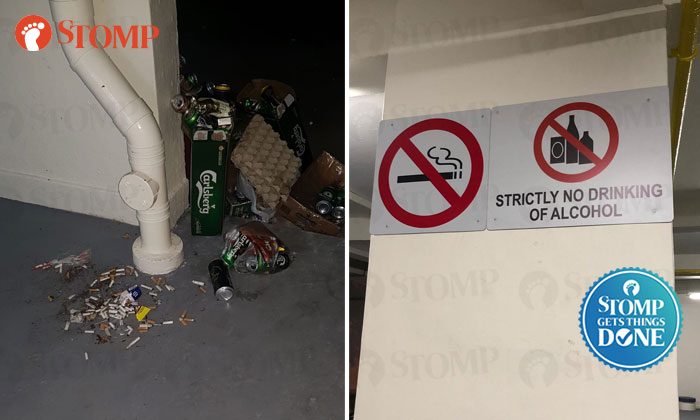 Signs banning people from smoking and drinking alcohol were put up at Block 42 Telok Blangah Rise after Stomp reported on how a resident was frustrated at litterbugs who repeatedly left cigarette butts and beer cans at the void deck.

In a report published on Dec 10, a Stomper told Stomp about the mess some residents and visitors leave after meeting to smoke and drink.

Apart from being an eyesore, she described how unhygienic and smelly the void deck can be.

"The ashes really stink when they get wet," she said.

"Also, when people drink under the block, they will just go to the corner to urinate near the discarded beer cans.

Another Stomper, who is also a resident of the same block, alerted Stomp to the signs banning smoking and the drinking of alcohol that were put up on Wednesday (Dec 19). 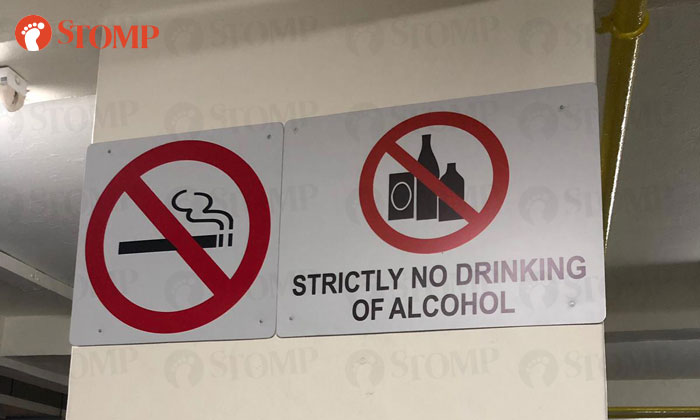 "I must salute the authorities for acting fast on handling the situation," he said.

Stomp checked back with the first Stomper who said that she is also aware of the new signs.

"They're really big, you wouldn't be able to miss them," she said.

She also thanked Stomp and said that she has noticed a remarkable difference in cleanliness at the void deck since the story was published.

"I really think that the change is a result of the article," she said.

However, both Stompers are concerned about the livelihood of the owner of the nearby provision shop.

"Because the signs don't explicitly say drinking is banned from 10.30pm to 7am, people are avoiding enjoying beers and such from her shop altogether," one resident said.

"I heard last night she was crying because she was losing business.

"From what I understand, her husband has diabetes and she is the sole breadwinner so she works 24/7 and never takes a break.