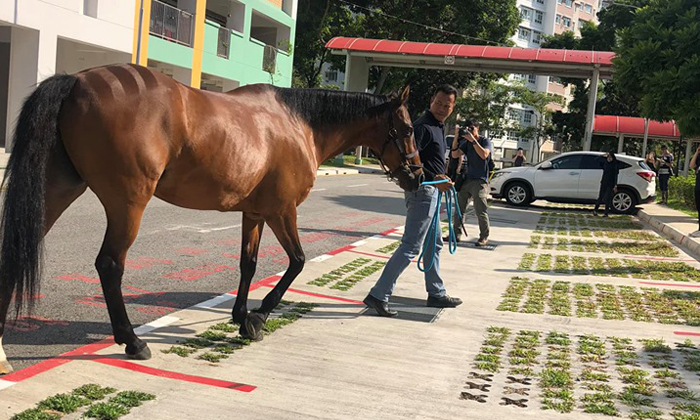 The recent unusual sighting of a horse in Yishun left netizens speculating on what the animal could be doing in the heartlands.

On Wednesday (Oct 16), Facebook user Honda William uploaded photos of the horse in a housing estate along Yishun Ring Road.

The animal can be seen being led into a float, which is a form of transport for horses.

The Facebook post has garnered over 3,500 shares to date, with many netizens wondering what was going on -- a horse-riding event or just pure Yishun eccentricity?

"It's going to be an awesome community project," he wrote.

When contacted by Stomp, Mr Ng declined to share further details and said more would definitely be revealed in November.

Stomp understands that charity organisation Equal Ark had borrowed the float from the Singapore Polo Club for a community project.

According to its website, Equal Ark is an animal-assisted intervention centre that offers horse-based therapy to at-risk youths, people with special needs, families, and elderly people with dementia.

It helps clients to develop social-emotional skills through experiential learning in a unique, outdoors and non-clinical setting.

Whatever this community project is, it sure sounds exciting!

This is not the first time animals have made surprising appearances in Yishun.

In 2017, netizens went into a similar frenzy over a cow that was spotted at a Housing Board (HDB) lift lobby in Yishun. The animal is believed to have been part of a Hindu ritual.

'Monstrous' caterpillars and a gigantic monitor lizard are also known to have paid a visit to the reputable estate.