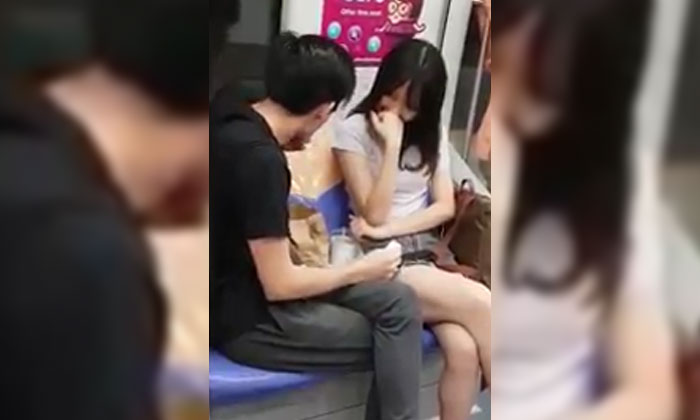 A video of a man blatantly eating on a train has received flak from netizens.

A witness who contacted Stomp said he saw the incident. According to him, the incident occurred on Tuesday night (Aug 7) on the North-East Line "between Farrer Park and Boon Keng MRT stations".

In the video, the couple are seen talking to each other with a paper bag and a cup between them.

The guy talks animatedly to the girl while holding a couple of fries in his left hand.

He then puts them into his mouth before reaching into the paper bag to get more.

The girl is not seen sharing the meal in the 20-second video but does not make any effort to stop her companion from eating.

Eating and drinking is not permitted in MRT trains and stations under the Rapid Transit Systems Act that was established in 1987.

People caught eating or drinking will be issued a notification of offence which carries a fine of up to $500.

The video was also posted on Fabrications About the PAP's Facebook page on Wednesday (Aug 8) and has since garnered over 62,000 views.

In the comments on the video, most netizens slammed the couple's poor etiquette and called for authorities to fine them.

Related Stories
See, this is exactly why we aren't supposed to eat and drink on trains
E-scooter blocks wheelchair-bound man from moving to allocated space on MRT train
No problem with using mobility device but do you have to take up so much space?
More About:
MRT
train
food
inconsiderate commuters