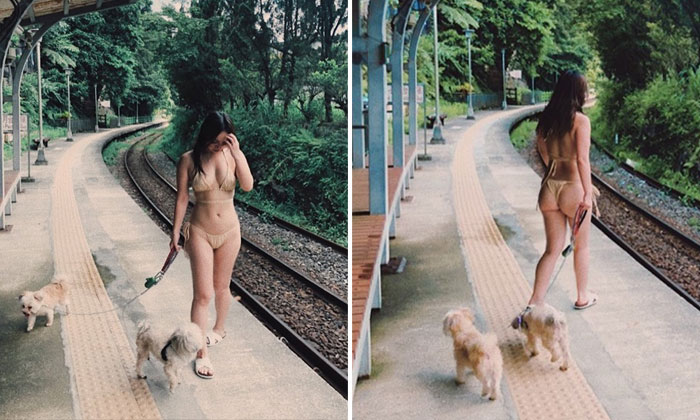 Maybe it was a hot day when singer Kimberley Chen took her dogs out for a walk.

But her choice of clothing - a bikini - has unleashed both howls of protest and barks of approval from netizens, after she posted the photographs on Monday (Sept 9).

Chen, an Australian artist who is based in Taiwan, was frowned upon by those who said the colour of her clothing - beige - made it seem as though she was naked.

Some critics said a bikini did not suit the train-station surroundings.

Other netizens, however, praised Chen, 25, for having a curvaceous body and the guts to express her individuality, even if she ran the risk of being called an attention-seeker.

But her supporters said that if Chen really wanted fame, she would not have left a Korean agency which allegedly made her take slimming pills to maintain a sexy image in the competitive music business.

Now, she is on track, her fans added, to call her own shots, with the video of her 2012 song Love You already breaching the 100 million mark for views.

Related Stories
Weather too hot? Bikini babe running around in Balestier sparks discussion
Photos of Carina Lau in swimsuit win her praise as a 'goddess who never gets old'
Woman walking around in bikini bottoms gets tongues wagging in Sabah
More About:
entertainment
celebrity
Taiwan
bikini
sexy
singer