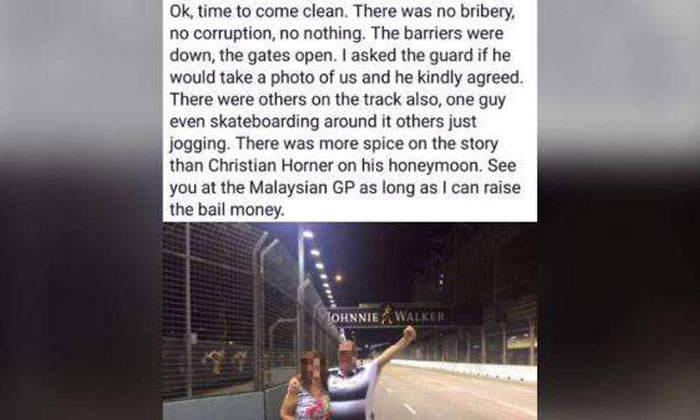 The Singapore Grand Prix said they have completed investigations and will not be taking any action.

A spokesman told Stomp in response to a media query:

"We have concluded our investigation and no further action will be taken.”

The netizen who claimed that he had bribed a security guard into allowing him and a companion onto the Marina Bay Street Circuit for a photo, has retracted his comments.

On Sep 18, Stomp reported that All Singapore Stuff had published a screenshot of a Facebook post showing the couple in question posing for a picture on the tracks near a Johnnie Walker advertisement board.

"3am in the morning. Bribed the security guard to let us onto track. He not only agreed, he took the photo. Non F1 fans won't understand this, but most of us will."

Following the publication of the post, the Singapore GP launched an investigation into the claim.

Yesterday (Sep 20), the netizen, who goes by the name 'Viv Smith' on Facebook, wrote in a closed Formula One group that it was 'time to come clean'.

All Singapore Stuff posted another screenshot showing his latest post about the controversy.

"There was no bribery, no corruption, no nothing. The barriers were down, the gates open. I asked the guard if he would take a photo of us and he kindly agreed," he wrote.

"There were others on the track also, one guy even skateboarding around it others just jogging."

"There was more spice on the story that Christian Horner on his honeymoon.

"See you at the Malaysian GP as long as I can raise the bail money."

When Viv Smith was contacted by The Straits Times, he told reporters that he is 'lying low' in Malaysia and declined to be interviewed.

He said that everything they needed to know is in his second post.

Security & Risk Solutions (SRS), the agency appointed to oversee security at the area where the alleged incident took place, said that its officers "did not compromise any safety instructions nor received any monetary rewards as allegedly claimed".