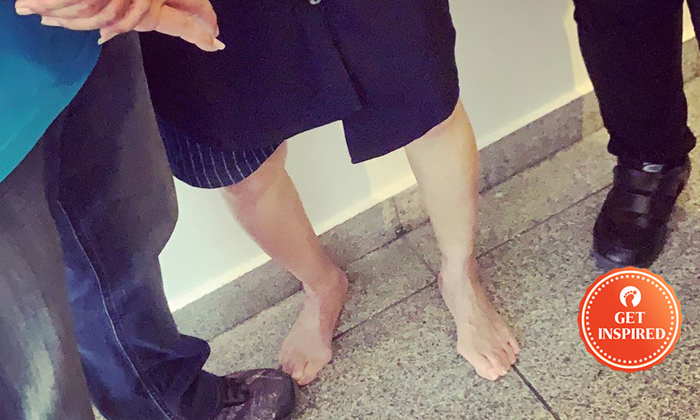 We might not be able to control what happens in life, but we can certain choose how to react.

And what one shopper witnessed in Jem shopping mall on Wednesday (Aug 12) might have begun as an unfortunate episode, but allowed her to see people from all walks of life banding together to help someone in need.

Facebook user Scarlett Chong recounted the emotional incident in a post that has since garnered over 3,400 reactions and more than 1,800 shares.

Chong wrote about how there had been a "commotion" in the mall, adding: "A lady with dementia, had an unfortunate toilet episode, and her adult son, with anger management issues, were both in the handicap cubicle.

"He probably lost control of his temper and the shouts drew a lot of attention.

"What I saw and what I heard, nearly drove me to tears at one point. It was very easy to draw certain conclusions, which might even be factual, but, sometimes, we have to look beyond before we judge. There was a mix of feelings. For both the mum and the son."

According to Chong, a group of staff from Japanese supermarket Don Don Donki immediately called mall security for help.

Chong shared: "And then the incredibly lovely Mariama from the security team came, who gave her lovely mum touch (from her necklace, she must be so proud to be one) and chained her arm around the old lady’s arm throughout to offer comfort despite the language barrier."

Another colleague kept the situation under control and gave instructions "with a cool head" while taking care of the auntie's son, said Chong.

Chong also lauded various staff members in the mall for helping out.

She said: "David Tan, probably from building management Jem Lendlease, came down and used his superb people skills to joke and distract the auntie so she would calm down.

"She was obviously traumatised and upset but took to him immediately because of his reassurances in Hokkien.

"Carmen from Love, Bonito when approached for help, she immediately took a dress off the racks to hand to the passer-by with no questions asked.

"And the big-hearted Imran Moosa Im-pire Hany Yankidal from the Singapore Police Force (SPF) who despite arriving later, noticed the security tag on her dress as they were going to move her somewhere else, and went to Love Bonito to pay for the dress out of his own pocket.

"'No shop theft was committed!' he announced good-humouredly.

"Also, he noticed the cut on the old lady’s lip."

Chong praised the SPF for being full of compassion and listening to the auntie's son "as he poured his woes", even contacting the relevant agencies to help both mother and son.

She also commended another police officer, Lee Fyza, for speaking to the man to calm him down, "coming from an understanding point of view without judgment, managing the situation with grace, and prescribing the best course of action with thoughtfulness."

In her post, Chong added: "What I saw was an outpour(ing) of humanity. And observing these people touched my heart greatly.

"And the various people who helped to shield, bring a chair, and those from the security team and Jem management who intervened when he nearly lost it. You guys are awesome."

Although "filled to the brim" from the compassion she witnessed, Chong admitted that the helplessness of what comes next "is equally hard to shake away."

She added: "A big thank you to all the kind Samaritans today."