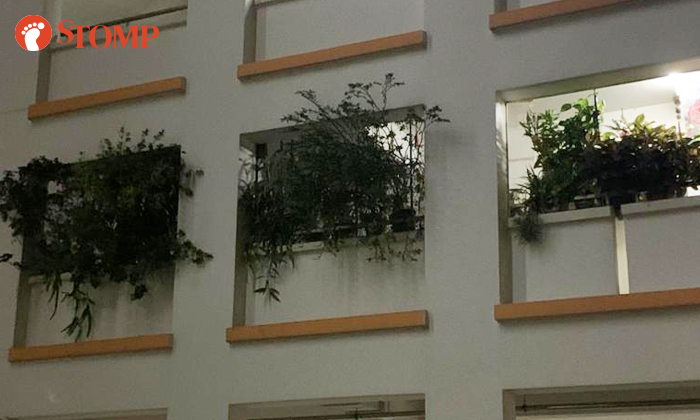 Bothered by the potted plants that your neighbour has adorned the common corridor with?

Well, at least you aren't living near an "overgrown jungle", said Stomper Francis.

He shared photos taken on Sunday (Sep 11), showing a cluster of plants peeking out from the second-floor corridor of Block 366 Tampines Street 34.

Francis told Stomp that this has been going on for around two years.

He said: "The plants are so overgrown that they occupy almost an entire stretch of the common corridor and balcony. They attracts ants and flies, make the corridors dark, as well as block natural sunlight and ventilation. It’s also extremely space invasive.

"Despite residents of the block writing to their Member of Parliament (MP) about this, the overgrown plants remain. They are still growing and becoming uncontrollable.

"It’s both an eyesore and an issue of clutter.

"Under the law, no person shall obstruct or cause or permit the obstruction of the lawful use of any common property with any thing.

"The town council and Housing & Development Board may remove any object, fixture or thing obstructing the lawful use of any common property.

"Hence, they should work together to tackle this irresponsible and inconsiderate 'corridor jungle' planted by a selfish resident."

A spokesman added: "We have been monitoring this case closely and observed that there is no corridor obstruction or clutter along the corridor.

"We have engaged the resident and he understands that he needs to prune his plants regularly and keep the corridor tidy."