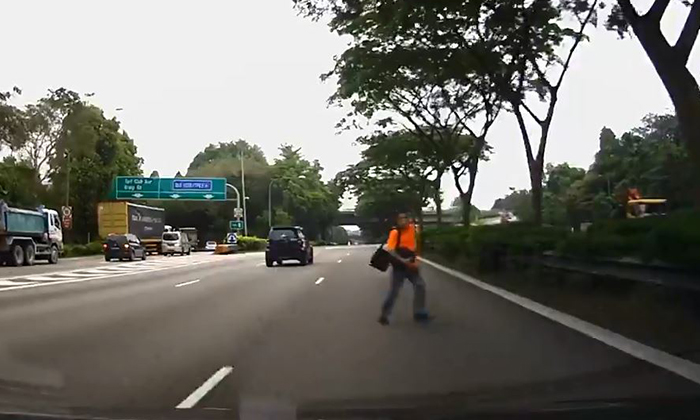 A driver was in for a shock when he saw a man walking along an expressway and had to swerve out of the way.

Dashcam footage of the incident was posted in the SG Roads Vigilante Facebook group by user Phang Yu Kang.

The incident is said to have occurred on Jan 6 at around 9.15am, near the exit to Turf Club Avenue and Kranji Road.

"That man just decided to stroll across the freaking highway," read Yu Kang's caption on the Facebook post.

In the video, the man can be seen running across the lanes of the expressway before briefly stopping at the rightmost lane where the car camera driver was travelling on.

The driver then quickly swerved to the left lane to avoid the man.

In response to a netizen's comment praising his skilfulness in avoiding the man, Yu Kang said, "Thanks bro but I was f***ing freaking out tbh. Couldn't think straight when that champion jumped out."

"If not (for my reflexes), I'll probably be in jail now bro," added Yu Kang.

Related Stories
Motorist has 'crazy' evening on CTE after seeing woman walk down expressway to flag cab and bike accident
Uncle with a death wish walks against traffic on first lane of PIE
School bus driver beats jam along Woodlands Street 41 -- by going against traffic
More About:
reckless
dangerous
expressway