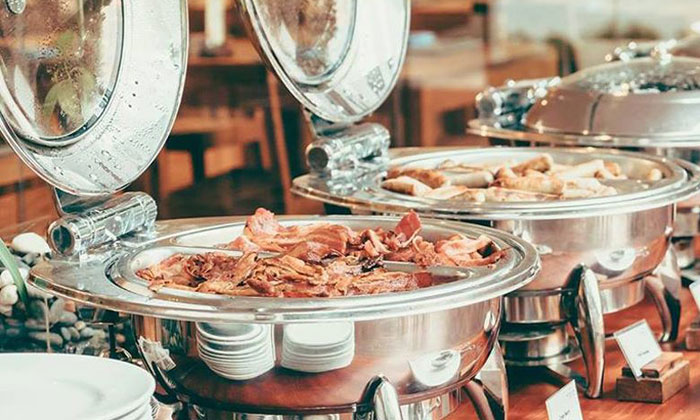 The catering arm of well-known restaurant group TungLok had its licence at the Max Atria at Singapore Expo suspended on Friday (Nov 23) after 190 people reportedly fell ill from eating food prepared at its premises.

Officers from the Singapore Civil Defence Force (SCDF) were among those who fell ill.

In response to queries by The Straits Times, the authorities said on Saturday that a total of 190 people had reported symptoms of gastroenteritis as of Friday.

The Health Ministry, the National Environment Agency (NEA) and the Agri-Food & Veterinary Authority of Singapore (AVA) were first notified of the cases on Friday, and conducted a joint inspection of TungLok Catering's premises on the same day.

None of them were hospitalised, they added in a joint statement.

Gastroenteritis is an intestinal condition that can be caused by a virus or a bacterial infection, with symptoms including vomiting and diarrhoea.

The bento boxes each contained white rice and three dishes, including curry chicken and vegetables, he said.

"We have been running our catering business at the Singapore Expo for at least six years and this is the first such incident," he said. "Our kitchens have all been certified 'A'. Things like this can happen and we hope to get to the root cause of it."

He added that the group is fully prepared to cooperate with the authorities in their investigations.

An SCDF spokesman told ST on Saturday that some of its officers and guests from overseas emergency services, who were at the Singapore Expo on Thursday preparing for the SCDF event on the weekend, had symptoms of diarrhoea or stomach discomfort after consuming catered food.

SCDF said that all the affected personnel and guests have since recovered.

It is currently working closely with the management of Singapore Expo to determine the cause of the matter.

"SCDF takes the well-being of our personnel and guests seriously and will continue to monitor the situation closely," the spokesman said.

NEA said the suspension of TungLok Catering's licence, which is in the interest of public health, will be until further notice.

As part of the investigations, food handlers were sent for stool screening. Food and environmental samples were also taken for testing.

In the notice, NEA said that all food handlers working at TungLok Catering are required to attend and pass the Basic Food Hygiene Course again, before they can resume work as food handlers.

He was one of 72 people who suffered gastroenteritis after eating the food prepared for a Deepavali celebration on Nov 6.