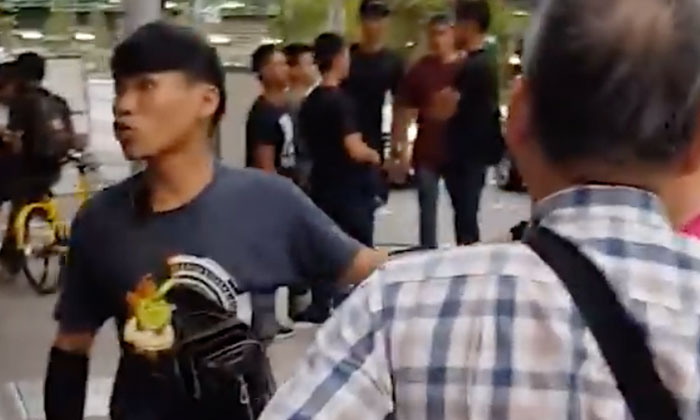 The National Environment Agency (NEA) has responded to a circulating video insinuating that an enforcement officer erroneously enforced against a man who threw a cigarette butt into a bin at Northpoint City in Yishun on April 19.

The agency said that the video uploaded online did not show the incident in full and that the offender had earlier been caught by the officer for littering with a cigarette butt before tossing the second one in the bin.

The original video, updated with an excerpt of NEA’s official response has been posted on Fabrications About The PAP’s Facebook page.

In the video, the offender dressed in a grey T-shirt is seen talking to an NEA officer and other bystanders.

He tells the officer that he has many ‘witnesses’, encouraging the person taking the video to post it on Facebook.

A man in a red shirt tells the person taking the video that he may be fined if he posts the video up, but the latter replies, “sorry, but I’m not scared.”

The person taking the video further claims that he was threatened by the officer because the officer wanted to issue a fine to the offender for throwing his cigarette butt in a bin.

In response to the incident, NEA has placed up a statement on its website, rebuking the claims made in the video. 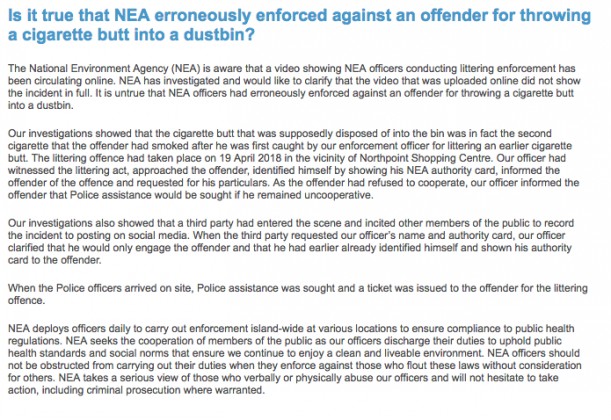 It also said that the offender had refused to cooperate after the officer identified himself and asked him for his particulars.

As a result, the officer told him that police assistance would be sought should he remained uncooperative.

Investigations revealed that a third party interfered amidst the situation, and incited other members of the public to record the incident.

The third party also asked for the officer’s name and authority card but was told by the officer that he would only engage the offender, to whom he had already shown his card.

Police officers were dispatched to the scene, and a ticket was then issued to the offender for the offence of littering.

In the statement, NEA also reminded the public that its officers should not be obstructed from carrying out their duties, and takes a serious view of those who verbally or physically abuse the officers, adding that it will not hesitate to take action, including criminal prosecution if necessary.

Related Stories
Haidilao's Clarke Quay outlet suspended for 2 weeks over unhygienic practices, fined $800
Ah Boy and Ah Girl smoke under shelter "because it's raining" -- then KPKB when they get caught
NEA responds to video of litterbug running away from enforcement officers outside Ngee Ann City
More About:
NEA
littering