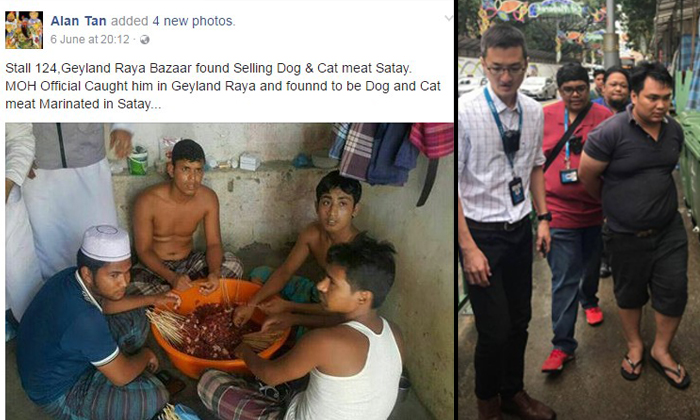 The National Environment Agency (NEA) is aware of rumours about "cat and dog meat satay" being sold at the Geylang Serai Bazaar and is currently investigating.

The claim warns of a "Stall 124" that has been caught by "MOH officials" for purportedly marinating "dog and cat meat" in satay.

It has been circulating on various social media platforms such as WhatsApp, Facebook and Twitter, after being reposted by several sources.

A Facebook post dated June 6 by Alan Tan made similar claims and was accompanied by four images:

Chinese newspaper Lianhe Wanbao reported that based on their investigations, the rumours circulated are false and only the photo of the man being arrested was from Singapore.

No arrests have been made of sellers mixing dog and cat meat into the food either, said the Ministry of Health (MOH) and Ministry of Manpower (MOM),

According to MOM, the only official arrests made so far were of the 22 unlicensed food handlers and illegal workers in a raid conducted last month.

In response media queries by Stomp, a spokesperson for the NEA said:

"The National Environment Agency (NEA) is aware of a message circulating online which claims that a stall in the Geylang Serai Bazaar is selling satay made from dog and cat meat.

"Based on NEA’s inspection on 31 May 2017, Stall 124 at the Geylang Serai Bazaar was selling ‘dengdeng’ and not satay, as claimed in the online posts.