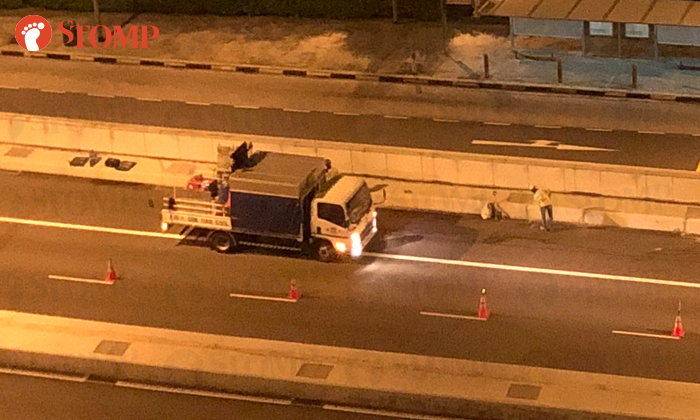 The National Environment Agency (NEA) has responded to feedback from a resident about construction work along Upper Paya Lebar Road being carried out during late hours.

The contractor was repairing cracks on the concrete parapet wall in the vehicular underpass along the road, according to the NEA.

Stomper Anonymous said he heard drilling from the road on consecutive nights, from 11.30pm till 1am.

Anonymous, who took a video of the noise on Mar 3 and shared it with Stomp, added: "Why are they drilling along the drains at midnight? Everyone is trying to sleep!

"I provided feedback to NEA (pictured below) but there wasn't any improvement to the noise level nor the timing where the works are to be done.

"In my opinion, they could have started the works during the afternoon when there is lesser traffic or 10-11pm where there is not so much traffic in the area." 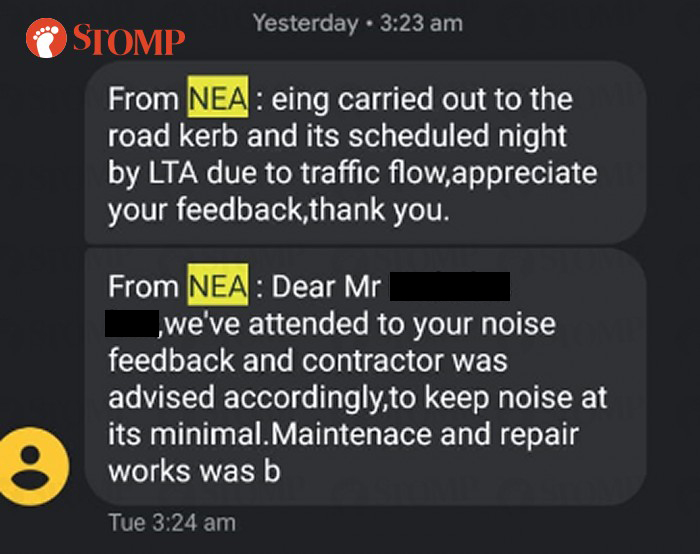 However, the NEA explained that the works have to be carried out "late at night" to avoid closing traffic lane.

A spokesman told Stomp in response to queries: "All contractors must abide by the noise regulations and keep within the noise limits stipulated by the NEA when carrying out construction work.

"NEA also inspects construction sites to ensure that the contractors comply strictly with the regulations and minimise noise nuisance. Contractors that exceed the permissible noise limits may be fined up to $40,000.

"The contractor was repairing cracks on the concrete parapet wall in the vehicular underpass along Upper Paya Lebar Road.

"The works have to be carried out late at night to avoid closing traffic lane, which will cause traffic tailback along this busy road in the day and affect private and public transport journeys.

"NEA’s investigation showed that there was no violation of the construction noise limits.

"Notwithstanding, the contractor will implement additional mitigation measures such as localised noise barriers to further minimise noise disturbance to nearby residents.