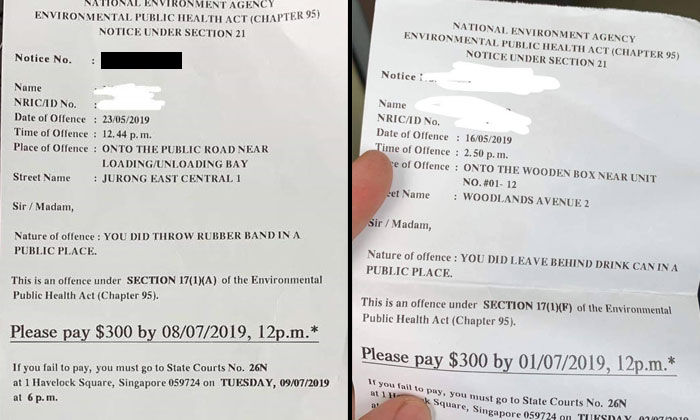 A viral photo of a ticket issued by the National Environment Agency (NEA) to a man for shooting two rubber bands onto a public road has sparked a furore online.

Several netizens were shocked that the man was fined $300 for his offence.

Others expressed approval of the fine and said if people make the effort not to litter they would not get in trouble. 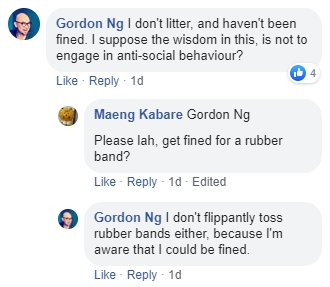 In a statement to Stomp on Monday (May 27), the NEA confirmed that the offence was committed on May 23.

It also addressed another photo circulating online of a $300 fine issued for leaving drink cans behind at Woodlands MRT Station.

"NEA is aware of the images circulating online of enforcement tickets issued for leaving behind drink cans and throwing rubber bands in a public place," a spokesman said.

"NEA confirms that on 16 May 2019, NEA enforcement officers observed two male subjects leaving behind their drink cans on a wooden box outside a unit at Woodlands MRT Station.

"Our officers hence issued each of them with an enforcement ticket for littering.

"On 23 May 2019, NEA enforcement officers observed a man walking towards his vehicle and shooting two rubber bands, one after the other, into the air.

"The rubber bands landed on the public road.

"Our officers thus informed him of the littering offence and issued him an enforcement ticket.

"The offender was cooperative throughout our officers’ engagement with him."

"We would like to remind the public that littering has environmental consequences, and keeping our environment clean by not littering is a gracious and socially responsible thing to do."